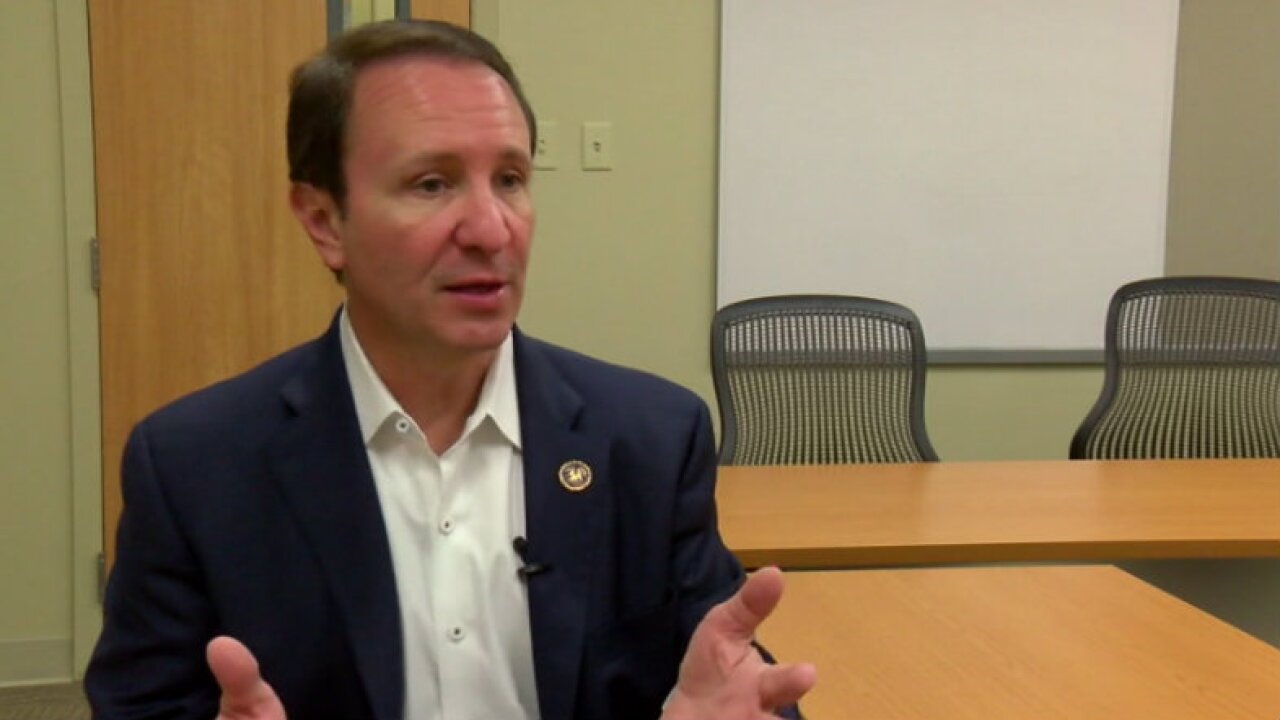 “After careful consideration, it is my opinion as the chief legal officer of the State that the order does not pass the constitutional test,” states Landry, who tested positive for COVID-19 this week.

According to the AG's website, "Attorney General Opinions provide legal advice and support to the State of Louisiana, its departments, agencies, and political subdivisions. Opinions of the Attorney General are advisory only; they do not have the force and effect of the law; and they are limited to the facts presented by the official or officials requesting the opinion. Further, the opinions may be changed or recalled due to subsequent court decisions and/or legislative enactments."

According to the opinion issued Wednesday, Landry believes the governor’s recent mandates do not appear to serve achieving any type of goal or mission in a manner consistent with statutory authority and Constitutional provisions.

Landry also states in the order that even though he is the statutory legal advisor of the Governor’s Office of Homeland Security and Emergency Preparedness (GOHSEP), he was not consulted prior to the issuance of any of the governor's executive orders during COVID-19, including the most recent one.

The opinion comes at the request of several state legislators over the governor’s statewide mask mandate that went into effect for Louisiana on Monday, July 13.

“When the COVID-19 pandemic started, the goal of government action was to ensure that our healthcare capacity to treat citizens was not overrun,” states Landry in the opinion. “Executive orders and mandates were put in place under our laws and Constitution with that simple goal in mind. I supported those actions. To that end, we seem to have achieved that purpose.

“Today, I am concerned that additional restrictions are being placed on our citizens, while we no longer have a set benchmark with which to measure our success,” he states.

Landry says he issuing the guidance for the many law enforcement agencies that have contacted him regarding their concerns about enforcement of the mask mandate.

Landry says the guidance should not be taken to discredit or reduce the significance of any protections taken by an individual, including wearing a face mask to prevent COVID-19.

However, he states that all mandates that carry enforcement penalties against the public must be rationally related to achieving a legitimate public purpose.

“To the extent they impinge upon the exercise of constitutionally protected rights, they must meet an event stricter test and be narrowly tailored to achieve a compelling government interest to such a degree that they justify the concomitant reduction in individual liberty,” Landry states.

Landry then urges all law enforcement agencies including the State Fire Marshal and other individuals acting under the color of law to exercise extreme caution when responding to calls related to violations of face mask orders.

“While face coverings may be recommended, the mask mandate cannot be enforced with criminal or financial sanctions,” he states.

He adds that threats to a business’ occupational license or other forms of threats to the business including cutting off water or sewer service, also would violate basic due process and could expose the government actor to civil liability.

Landry then points to the governor’s order itself, 89 JBE 2020, saying that it does not define numerous terms, contains minimal statistics in support and contains no geographical data.

“It vaguely references possible sources of outbreaks based on vague hearsay from ‘contact tracers,’” states Landry. “This foundation is a flimsy one upon which to build a criminal regulatory edifice.”

Landry also points out that the order is even more vague as to penalties and enforcement and has several exceptions that are subjectively determined.

The opinion states that all of the exemptions listed in the order - including those for children ages under 8 or for those with a medical condition - appear to be vague, subjective and/or unenforceable. The order does not demand parents prove their child is under the age of 8 and does not define what the medical conditions are while other state and federal laws prohibit demanding or forced sharing of personal health information.

The opinion states that, in short, virtually any individual may fall within one or more of the exemptions listed in the order.

Landry states that prohibitions from the governor must be clearly defined and the government should articulate its aims with a reasonable degree of clarity.

“The restrictions contained in this Proclamation fail the basic test,” says Landry. “Similarly, the Proclamation must provide fair notice so that those who wish to follow the order may avoid its prohibitions.”

He says the proclamation also fails this test because citizens not only cannot predict which actions are prohibited, but also face potential unlawful arrest and unlawful searches and seizures for “trespassing” or “any other law” that a person “may violate” even if they are fully compliant.

“Arbitrary and discriminatory enforcement is not only possible, but is highly probable and even encouraged by the order,” Landry says. “At the same time, the order is also unconstitutionally overbroad.”

“Moreover, the government's legitimate purpose to validly control and prevent some conduct cannot be accomplished by means that sweep unnecessarily broadly and invade the areas of freedoms protected by the First Amendment. This Proclamation fails this fundamental constitutional norm.”

The opinion also states that Louisiana courts have also noted other limits on the governor’s powers and consequences of exercising powers not granted to him. As an example, the opinion states the governor has no power to make substantive law through an executive order, even in an emergency.

Landry also states that the governor’s mask mandate does not say who would issue a citation to businesses for failing to enforce mask wearing of individuals.

“The Proclamation does not say who would issue the citation and for what,” Landry writes. “It is likewise silent as to what the sanctions may be, or the legal basis for conscripting businesses to enforce executive orders.”

Landry states that the order tries to turn private businesses into the “Governor’s Proclamation enforcement arm.”

Landry’s opinion adds that neither the Louisiana Homeland Security and Emergency Assistance and Disaster Act nor the Louisiana Health Emergency Powers Act authorize the governor to unilaterally by executive proclamation make businesses his proclamation enforcement police. And, that they may not be threatened with “citations” or otherwise sanctioned for refusing to be his enforcement arm.

The opinion contrasts with what Landry said at the beginning of Louisiana's response to the pandemic, in a statement released March 18 which included the following language:

As Attorney General, I have been asked by some if the Governor has the authority to take certain actions, like: limiting the size of public gatherings, suspending some legal deadlines, and ordering restaurants and bars to limit service. The short answer is yes.
The Governor, working with the Public Health Officer and the Secretary of the Department of Health, has a broad scope of authority in a public health crisis to protect the public. He could, ultimately, take more drastic measures. He has not done so yet. To date, he has acted with restraint and consideration for individual liberty interests. I appreciate that, as I feel strongly about individual liberties – Constitutional liberties.
He is asking – and I am asking along with Coach O – that people to follow these directives to slow the progress of the virus and ultimately save lives. All of us want these restrictions to be in place for the least amount of time necessary to address and limit the threat. Restrictions on restaurants and public gatherings are not done to limit individual liberty or political speech; in this specific case, they are done to limit death from an external threat.
My staff at the Department of Justice is researching and reviewing the Constitution and statutes that grant emergency powers to each of our State Branches of Government so that we can provide them with all of the legal tools available to combat this epidemic while preserving as many liberties as possible. I am making sure this is all rooted in common sense as well.
In some cases, we may need to make adjustments to make sure all proclamations stay within the law. I have asked the Governor and the Legislature to stay in close contact with my office so we can ensure his actions stay within his scope of authority, so we can protect legal rights, and so we can identify actions other officials may need to take.
But just like the team you see before you (including Coach O), we are all working together as a team in State Government.

You can read the attorney generals opinion in full here.