HOUMA – The Louisiana State Police Bureau of Investigations (BOI) are actively looking for a suspect who fled from a trooper during a traffic stop Wednesday morning.

According to a spokesman with state police, a trooper attempted to stop a truck heading north on LA 24.

The driver, later identified as 29-year-old Kendall D. Lightell, of Houma, allegedly ignored the trooper’s signal and sped off. 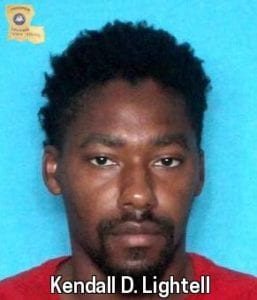 The spokesman says Lightell then ran a red light before pulling over and getting out of his truck without putting it into park near LA 3040.

Troopers say the suspect was armed and that the responding trooper fired his gun.

Lightell allegedly fled the scene. At this time, police don’t know where he is.

The trooper wasn’t injured, and investigators believe the suspect was not injured either.

Lightell is wanted for aggravated assault on a police officer, carrying a firearm by a convicted felon, and aggravated flight from an officer.

Anyone with information about his whereabouts is asked to contact Troop C at 985-857-3680. You can also submit a tip online by visiting www.lsp.org and clicking the Suspicious Activity link.