UPDATE: WWL in New Orleans is reporting that a child thought to be kidnapped this afternoon has been found safe.

The New Orleans station is reporting that Vince Johnson wasn’t kidnapped after all.

At about 2:30 p.m., 10-year-old Vince Johnson was inside of his residence and stated that he was going to place trash in the trash bin, located in front of the residence. His mother stated that at about 3:03 pm, she looked throughout the residence for her son but could not locate him. At this time, she called his cellphone and did not get an answer. Shortly after, she received a text message on her cellphone, from his cellphone number. The message stating that he was kidnapped from outside his residence. There has been no further communication to her phone or any response on several call backs to her son’s cellphone. 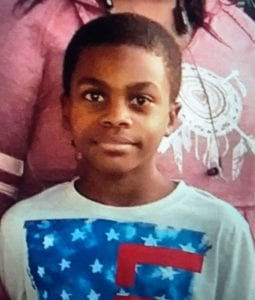