Suspect charged with 5th DWI after reportedly escaping from hospital

They say 35-year-old Jonathan L. Nash was then arrested after escaping from a Baton Rouge hospital while being treated for injuries. 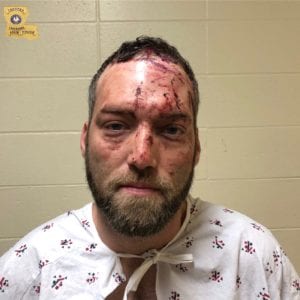 Shortly before 10:00 pm on Friday, December 28, 2018, Troopers say they were notified of a two-vehicle crash on US Hwy 190 west of LA Hwy 415 in West Baton Rouge Parish. They say Nash was traveling eastbound on US Hwy 190 in a 2004 Ford F-150, when he rear-ended an eastbound Dodge Ram pickup pulling a trailer. As a result Nash’s Ford left the roadway and entered a ditch. The driver of the Dodge was uninjured.

Nash was placed under arrest for DWI (5th offense), Driving with suspended license for prior DWI, Open alcoholic container in a motor vehicle, Careless operation, and No seatbelt. This was reportedly the second time Nash was arrested for DWI by the same Trooper.

Nash suffered a large laceration on his head as a result of the crash, and was treated by paramedics at the scene. He was then transported to Our Lady of the Lake Regional Medical Center in Baton Rouge for further treatment, but troopers say he fled from the building after arriving.

Nash was located at a gas station on Essen Lane near the hospital. He was placed under arrest again by Troopers, and charged with Flight from an officer (felony), Simple escape, Jaywalking, and Disturbing the peace (public intoxication).