Services set for Slidell Police Officer who died after crash

Funeral services will be Wednesday for the Slidell Police Officer who died following a crash.

Slidell Police Officer Jason Seals, a member of the department’s motorcycle unit, was injured in September as he participated in a funeral escort. Police said he struck a vehicle that unexpectedly pulled in front of him. 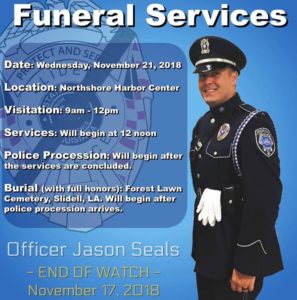 Funeral services, with full honors, will be held at the Northshore Harbor Center (100 Harbor Center Boulevard, Slidell, Louisiana) on Wednesday, November 21, 2018, at 12:00 noon.

The route of the funeral procession is still being finalized, and will be released sometime tomorrow. For updates, follow the department’s Facebook page here.

Here’s video of the department escorting his body home to Slidell.