Deputies searching for suspect who took selfie during break-in

The East Baton Rouge Sheriff’s Office is searching for a man who unknowingly took a selfie after allegedly breaking into a residence and stealing a handgun.

Deputies say the suspect entered a residence on October 8 in the 1000 block of Elvin Drive in Baton Rouge. The suspect allegedly gained access by breaking the glass on a rear door of the home. 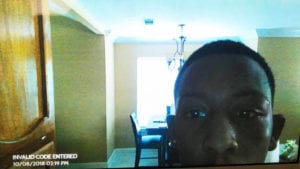 A handgun was stolen during the burglary. Deputies say that before leaving the home the suspect captured a selfie of himself with the alarm system.