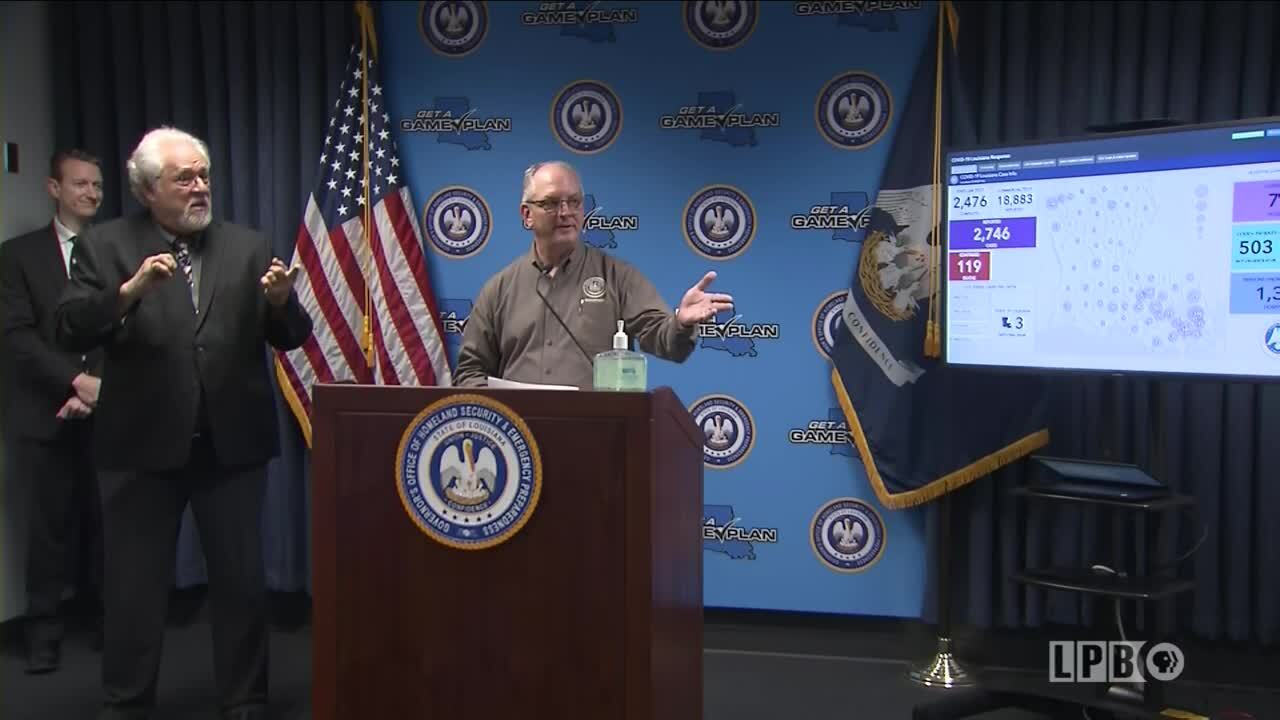 Governor John Bel Edwards held a press briefing on the latest information on COVID-19 on Friday.

Edwards says that the numbers should show why it is so important that the state help slow the number and spread of the virus. Edwards said that the percentage increase was lower than on Thursday but that number, he says is because half as many test came back.

So far, 119 people have died. That is an increase of 36 deaths, the largest number to be reported in a single day for the state.

New Orleans has now surpassed 1,000 cases and Northern parishes are also seeing an increase. Edwards says that while some parishes are still not reporting cases "I can assure you coronavirus is in every parish."

Edwards urges that residents heed the stay at home order to help slow this rate of increase the state is seeing. "Be a good neighbor," he emphasized.

Orders for 12,000 ventilator were placed and of those requested, 192 ventilators have been received and disseminated to hospital locations in the state. More are still expected.

Delta Airlines will fly out doctors and other healthcare professionals who are helping to fight COVID-19. Those health professionals will need to apply at lava.dhh.louisiana.gov

No roads are being closed, Edwards explained, dispelling recent rumors of a complete state shutdown.

Responding to a reporter's question about the Surgeon General's comments that Louisiana will see numbers like New York in the coming days, Edwards say he agrees with that statement seeing the current trajectory the state is on. Edwards clarifies that Louisiana will not meet the numbers because New York population exceeds that of Louisiana.

Louisiana is expecting 1.8 billion dollars in funding for the state. Edwards says that the money from the stimulus package has not been allocated.

In relation to the parishes that had no confirmed cases, The Louisiana Department of Health says that this may be because of inadequate testing in those areas. Edwards did mention that testing could be faster at certain sites in the state.

"All of these things are improving tremendously overtime," he said. "We always want to be better."

This week, Edwards said that the first case in Louisiana seems correlated to Mardi Gras. He explains that the state had received no word or concern from any health departments such as the CDC about concerns during that time. In the U.S. Edwards says that there were only a few confirmed cases, none of them in Louisiana.

The first case in Louisiana was confirmed at least two weeks after Fat Tuesday.

The Louisiana DOC has reported two confirmed cases in the prison system, however the governor says that no inmates have tested positive. Measures are put in place to keep persons in those state prisons safe. He said that if any inmates or staff workers meet criteria to be tested, they are tested.

There are 54 parishes in total reporting cases of COVID-19.

The Acadia Parish OHSEP Director says that the parish's first reported death is of an individual who was 89 years of age with underlying medical conditions.

Dr. Tina Stefanski says that the three deaths in St. Martin Parish were of 41, 70 and 89-year old residents.

The Louisiana Department of Health is now reporting the number of people hospitalized in the state due to COVID-19.

The department reports that 773 patients are in hospitals and that 270 of those patients were on ventilators.