UPDATE: All lanes of I-10 East at the Breaux Bridge exit are now OPEN following a crash.

According to DOTD, the right lane of I-10 East is blocked near mile marker 108 due to a crash.

Congestion has reached the I-10/I-49. Motorists can expect heavy delays, according to DOTD.

No detour routes have been established. 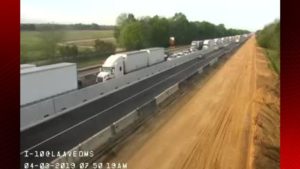 The right lane remains blocked I-10 East at mile marker 108 (before LA 328 / Breaux Bridge) due to an accident. Congestion has reached Louisiana Avenue. Expect heavy delays.