Some Catholic cooks got instruction today in dishes for a St. Joseph’s Altar. 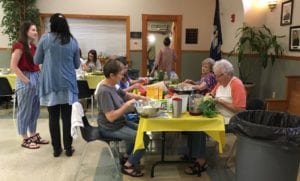 St. Bernard Catholic Church in Breaux Bridge hosted the event, which was offered to cooks who want to prepare for the church’s annual St. Joseph’s Altar.

The St. Joseph’s Altar is a tradition celebrated by Catholics on St. Joseph’s feast day, which is March 19. It is a celebration with roots in Sicily.

The story goes that the island country was suffering a terrible famine, and the citizens prayed to St. Joseph, Sicily’s patron saint, for relief. After it finally rained, the people of the island created a table of food they had harvested as a way of giving thanks. After it was displayed, the food was distributed to the less fortunate.

St. Joseph’s Altars are very popular and elaborate in the New Orleans area, as New Orleans had a very large number of Sicilian immigrants.