UPDATE: I-10 East is now open after being closed Tuesday following an 18-wheeler fire near Henderson.

Traffic was previously being diverted from I-10 East onto I-49 North and then on to US 190 East.  It is still unclear if there were any injuries associated with this fire.

There is no congestion.

Video below shows the scene Tuesday morning from a motorist on I-10.

Traffic was stopped on Interstate 10 eastbound while the truck burned on the Basin Bridge. 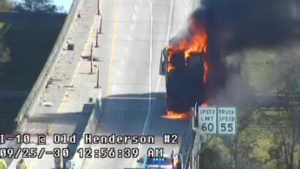