In the weeks since three St. Landry Parish churches were destroyed by arson, KATC has shared stories of church leaders and members discussing their pain, their sadness and their determination to rebuild. Now, we are introducing you to a younger member of one of those churches, Jazmine Milburn, who’s honoring her family’s legacy in the fires’ aftermath.

“Just being here, I just feel like mourning, you know, like death when you go to a funeral. This is what it feels like. Mourning what you knew,” Milburn said.

Milburn is a third-generation member of Greater Union Baptist Church. Her grandparents were lifelong members of the church and are buried in its cemetery. Her grandparents had twelve children; five of the girls were married in the church. The entire family is now finding light from this dark situation.

“What they did do was motivate me and give me a sense of passion and a little more faith because I got to see God and really believe that this is all his plan,” Milburn said.

Attending vacation bible school was one of her fondest memories of the church. She pulled out photos from 1997 when she was four.

“Just being in the atmosphere. Everyone just singing and dancing,” Milburn remembered.

Milburn’s grandparents died in 2018, ten weeks apart. She says she’s thankful neither of them lived to see this tragedy.

“He was so prevalent in that church, and his presence was just so needed in that church. I’m glad he wasn’t here to see it. I think it would have broken his heart,” Milburn said.

Milburn now lives in Baton Rouge. She hadn’t seen the church since it was torched until Friday. She says she’s starting her healing process.

Milburn pointed out where she remembered what used to be the choir stand, the pews and other objects that were in the church. Her sister joined her and KATC’s Justice Henerson while walking through the rubble, looking at scraps of paper left from the fire.

While looking through the rubble, Justice Henderson found a piece of paper with the sisters’ names on it from a souvenir book that was burned in the fire. The sisters were speechless.

On Friday morning, another one of Milburn’s family members found a family photo from that same book. 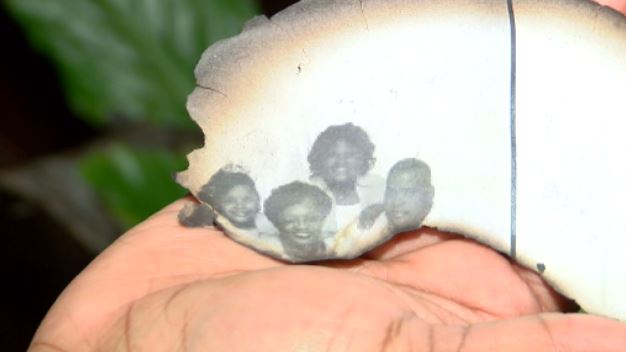 As the sisters remember what was, they’re looking forward to what’s to come. Milburn says she hopes the new church reaches more people in Opelousas.

“Now, this is written down in my history. It’s a part of my family’s history. It’s Easter Sunday, and we don’t have a sanctuary to go to. It’s something you’ve just got to live through and march on,” Milburn expressed.

Milburn says as for Holden Matthews, the man accused of setting the three churches on fire, she prays for him and his family every day.