State Fire Marshal deputies, along with ATF agents, are continuing to investigate the circumstances surrounding fires at three churches in St. Landry Parish.

At this point, much is still unknown about the three church fires. At a press conference on Thursday, officials say that they believe that these three fires are suspicious. 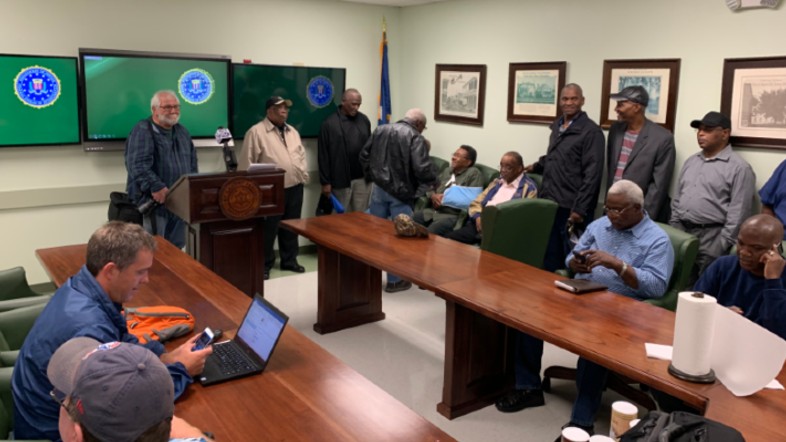 State Fire Marshal Butch Browning says that there is a pattern to these fires but he says that it is still unknown that these fires are related.

At this time, investigators have identified suspicious elements in each case and those elements are being thoroughly probed.

“There is clearly something happening in this community,” said State Fire Marshal H. “Butch” Browning, “That’s why it’s imperative that the citizens of this community be part of our effort to figure out what it is.”

The causes of the fires have not been determined. No suspects have been developed at this time.

This is an active investigation and as a result, specific details in each fire are being withheld to keep the integrity of the investigations.

In addition to the collaboration between the SFM and ATF, the FBI is participating in the case and St. Landry Fire Districts #2 and #3 are assisting.

Suspects in this investigation, once they are determined, may face state and federal charges.

The Governor was also briefed on each of the fires.

The President of the  Ministry Association in the 7th District of  St. Landry Parish says they do believe they are being targeted. They also say they continue to work with each congregation affected to provide guidance.

St. Landry Parish Sheriff’s Bobby Guidroz says that they will be providing security for any churches that may need any additional help.

Tips can be submitted anonymously by calling our Arson Hotline at 1-800-256-5452 or by submitting information through our online tip form which can be found at lasfm.org.

Thursday afternoon, Governor Edwards released a statement on the church fires in St. Landry Parish and a similar fire in Caddo Parish.

Our churches are sacred, central parts of our communities and everyone should feel safe in their place of worship. We do not know the cause of these fires in St. Landry and Caddo parishes, but my heart goes out to each of the congregations and all of those who call these churches home.

I have directed the State Fire Marshal to work with local law enforcement to aggressively investigate the cause of these fires. If you have any information that may help determine who or what caused these blazes, you may submit tips anonymously by calling the Arson Hotline at 1-800-256-5452.

In times like these, it is important for us to remember the words from John 15:12: ‘My command is this: Love each other as I have loved you.’  I’m asking the people of Louisiana to follow this teaching and join their prayers to mine as we love and support these congregations.

Video from church fires are below:

Fire officials are on the scene of a fire at a church in Opelousas.

Fire District #3 says they are on scene this morning at Mt. Pleasant Baptist Church on Hwy 182 in Opelousas.

The fire district says that the State Fire Marshal’s Office and the U.S. Bureau of Alcohol, Tobacco, Firearms and Explosives are on scene investigating at this time.

The district also says that it is currently unclear if the cause of the fire was weather-related or caused by other means.

The church’s pastor says that the front of the church is the only portion still standing after the fire. There are plans to rebuild the church.

A photo posted by the State Fire Marshal’s Office shows the damage.

This is the third church fire investigated within the last 10 days in St. Landry Parish.

The State Fire Marshal’s Office investigated a fire at the Greater Union Baptist Church on Tuesday morning. It is believed that foul play was involved in that fire.

Another church fire was investigated on March 26 at St. Mary Baptist Church in Port Barre. A cause of that fire has not been released.