UPDATE: Suspect wanted in Eunice shooting turns himself in

UPDATE: DeMondre Terry has turned himself in to St. Landry Parish Sheriff’s deputies.

He was booked with attempted second degree murder and aggravated criminal damage to property. 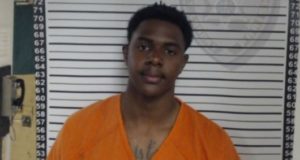 A suspect is now wanted in connection with a shooting in Eunice over the weekend.

The Eunice Police Department says 21-year-old DeMondre Desmond Terry is wanted in connection with a March 16, shooting on E. Laurel Avenue at Kim’s Market in Eunice.

One person was injured in that that shooting. His injuries appear not to be life-threatening, according to Police Chief Randy Fontenot.

Terry is wanted on charges of Attempted Second Degree Murder, and Aggravated Criminal Damage to Property.

His last known address is in the 400 block of Jelks Street in Eunice. Terry is to be considered armed and dangerous.

The public is asked to contact the Eunice Police Department or local law enforcement agency if you know of Terry’s whereabouts.

You can also contact St.Landry Parish Crime Stoppers at 337-948-TIPS or on the app at P3Tips.com.