According to Chief Randy Fontenot, officers with the Eunice Police Department, assisted by the St. Landry Parish Sheriff’s Office SWAT team and Eunice City Marshal’s office, executed a search warrant in the 200 block of North Street and South Mallet Street. 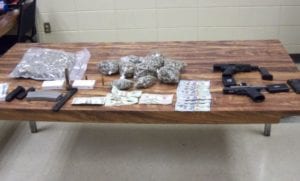 Officers were in search of stolen firearms and illegal narcotics. The search resulted in the seizure of 2.5 pounds of Marijuana with an estimated street value of $20,000.00.

Delridge Robinson, 22, of Eunice was booked with possession with intent to distribute marijuana, illegal carrying of weapons in the presence of drugs and possession of drug paraphernalia.

Weapons were also recovered and seized during the search and $1,000 in cash was seized.

Chief Fontenot asks that anyone seeing illegal or suspicious activity call the Eunice Police Department at (337) 457-2626 or report it to Crime Stoppers at (337) 948-TIPS or at p3tips.com.