He was known by friends in the Air Force community as Rob or Mose.  Rob was proud of his Cajun roots but also enjoyed his world travels.  He was an avid runner, cyclist, and mountain climber who took great pleasure from the company of family and friends as well as enjoying the majesty of the Rocky Mountains.  He volunteered time as a coach for local adaptive cycling and climbing programs where he helped others recover and adjust to physical and mental challenges. 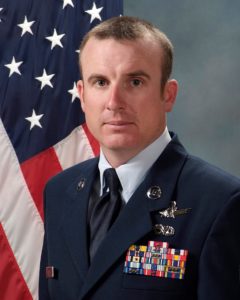 Rob and Amanda (Sheley) were married on April 23, 2005.  Amanda earned her Bachelor of Science degree in animal sciences from the University of Missouri and relocated to the Denver area where the two met and fell in love.  They shared a love of animals and opened up their Peyton, Colorado home to a number of adopted dogs and cats.

Rob was born on June 19, 1981, in Lafayette to Harold R. Mosley and Nancy S. Mosley.  Rob graduated from Opelousas Senior High in 1999.  He received a Bachelor of Arts degree in International Relations & Affairs from American Military University in 2008 and an Associate of Arts & Sciences degree in air & space operations technology from the Community College of the Air Force in 2013.  He earned a Master of Science degree, with honors, in space studies from American Military University in 2013 and was working towards a second Master’s degree in organizational leadership from Embry-Riddle Aeronautical University. 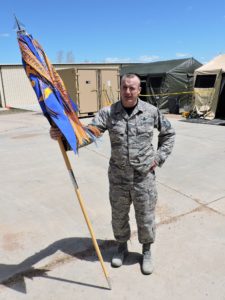 He was preceded in death by his mother, Nancy S, Mosley, and his sister, Robin Amanda Jeffers.

Rob is survived by his wife, Amanda Mosley; his father, Harold Robert Mosley and his sister, Amber LeAnne Mosley.

In lieu of flowers, memorial contributions can be made to the National League of POW/MIA Families, an organization very dear to Robert.

A viewing will be held on Friday, November 30 from 4:30 p.m. to 6 p.m. at The Springs Funeral Services-North, 6575 Oakwood Boulevard, Colorado Springs, Colorado.

Mosley will be brought back to Louisiana on Monday. The plane lands at 2:25 p.m. at Louis Armstrong New Orleans International Airport. There will be a procession from the airport to the Melancon Funeral Home in Opelousas via U.S. 90 to I-49.

A celebration of life service with military honors will take place on Wednesday, December 5 with viewing at 8 a.m. and service at 2 p.m. at the funeral home, 4708 I-49 North Service (Frontage) Road, Opelousas.