Vounlexus Ceasar says she tried to mind her own business when a shooter came through the Sunset apartments community in Eunice last night.

“I was sleeping and all I heard was gunshots. My sister was on the sofa, then I woke up and saw her and my brother crawling were crawling on the floor. I didn’t really pay no mind, so I went back to sleep,” says Ceasar.

After the scene was clear, she was once again woken up. This time it was her sister.

“She said ‘Lex, they shot your car up!’ I said, ‘No! Why?!’ I came outside and I started crying because I just got my car two days ago and I work hard for what I want,” says Ceasar, whose new car has been penetrated by at least seven bullets.

Ceasar’s is one of at least three cars that were caught in the fire between a shooter and their victim. The owners say there is no doubt their vehicles were not the intended targets.

“I don’t have beef with nobody for them to come in and do bad stuff to me,” says Ceasar, adding that she is not surprised this happened on her street.

“Oh, this is not the first time this happened. This has been happening, but me and my mom we got to go.”

Now she and her mother are working to get their cars repaired, and then they say they’ll search for a new home. 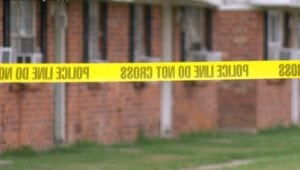