There’s a disturbance in the Bay of Campeche: Here is Rob’s take

The tropical disturbance in the Bay of Campeche remained disorganized enough for Hurricane Hunters not to fly a recon today, however, they may get out there tomorrow if necessary.

The global models continue to disagree on organization and certainly moisture fields, with the GFS stringing the system out and northward into Texas and points east, while the much more reliable Euro maintains a weak organized low pressure system that could become a tropical storm or hybrid type of a system that will likely bring a “weather event” to Louisiana and Acadiana Thursday.

The system identified as 91L has a 60% chance for development per the NHC as of 2 p.m.

While I await the latest run of the tropical models, I’ll comment on the big picture…

It looks like there will be a low pressure system skirting the Western Gulf Coast from Eastern Mexico to South Texas over the next several days…following the lead of the Euro Model, this system may get picked up by an initially, progressive upper low emanating from the west, and rolling through Texas Wednesday which will energize the system as it approaches the Gulf Coast From Southeast Texas eastward, or even after it moves inland.

Whether this remains a disturbance, becomes a depression, tropical storm or sub-tropical storm, it looks to bring several threats to Louisiana by Thursday. 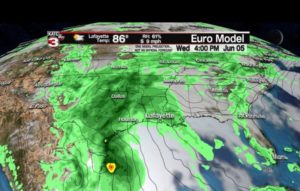 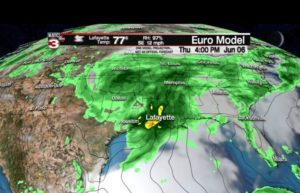 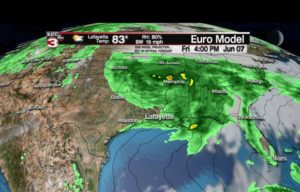 The threats include a possible rainfall of 4-8″ (and may ultimately be more as you can never underestimate deep tropical moisture interacting with an approaching upper level low) and a storm tide.to the Louisiana Coast, that we can ill afford due to already high water levels, particularly in St Mary and Lower Saint Martin Parishes. 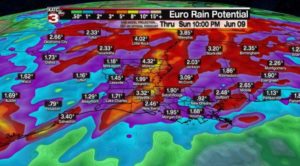 These weather threats should be in and (mostly) out Thursday into Friday morning for Acadiana, ending for Eastern Louisiana around midday Friday (based on latest Euro), but there are hints that the system may become a “meanderer” later in the week and into the following weekend, producing torrential rains from Eastern Texas, to Louisiana, then Arkansas, into the Mid-Mississippi, Tennessee and Ohio River Valleys…so we may be talking about this system for quite a while (all by the way, the runoff will feed back into the Mississippi down the road).

In the short term, we need to be ready here in Louisiana for a moderate risk of at the very least, low end tropical storm arriving Thursday…and even if we don’t see that, I do see tides increasing 2-3ft above normal minimally along the coast, and there will likely by a swath of area wide rains of 2-6″, but there could be a stripe of 6-12″, in my opinion, somewhere within the deep tropical moisture heading for the state…these are scenarios that the Euro provides today and are fairly consistent with previous runs.

So we have something likely to come to Acadiana and Louisiana, and the details will likely change, but I see us having to deal with something unpleasant Thursday anyway you slice it.

Be ready for the possibility of a “Potential Tropical Cyclone” statement coming from the NHC at some point early this week too.

I’ll stay away from the impacts on the Morganza Spillway opening Thursday, as I’m sure USACE is dealing or will deal with this scenario.

Stay with us on every weathercast this week…and get direct updates through the KATC WX app.

Below is the Euro Model data freely available and updates a 4 am and 4 pm daily at: https://katc.com/more-futurecast-products/ 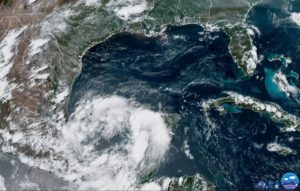