LAFAYETTE, La. – Raymond Blanco couldn’t wait. The retired University of Louisiana at Lafayette administrator and coach lifted the black velveteen cloth to preview the plaque beneath.

The ceremony designating a suite of office space in the University’s Student Union in his honor had yet to start, but Blanco freely admitted that patience was never his forte.

But a succession of former employees at Friday’s dedication of the Raymond S. Blanco Dean of Students Suite listed other strengths he displayed – and demanded in them – during his 46-year career at the University: authenticity, compassion, fairness, and tolerance.

Dr. Joseph Savoie is the University’s president, but Blanco hired him in the 1970s as an associate dean of students. Savoie called his former boss a “master motivator.”

“His larger than life, exuberant personality, his always-in-motion demeanor often amused, sometimes confused, but always enthralled everyone he came into contact with. His nearly half-century of devotion to our students’ welfare and his faithfulness to social justice influenced thousands, and created a legacy deeply rooted in the University’s culture,” Savoie said.

Blanco joined the football coaching staff in 1963. From 1969 and 1974, he was dean of men, dean of student personnel, and dean of students. He then became vice president for Student Affairs, a position he held until his 2009 retirement. 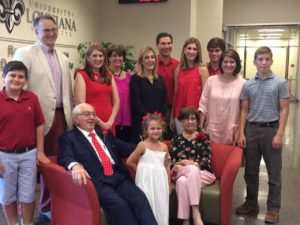 As an administrator, Blanco initiated the Dean on Call program, which enabled students to contact a dean whenever they needed help. He was also responsible for introducing emergency call boxes on campus.

But those were public achievements. Many of the moments in which Blanco had the greatest influence on the University and its students occurred out of the spotlight, said Judy Daniels, former assistant dean of student personnel.

She went to work for Blanco shortly after her graduation in 1972. Daniels said her arrival on campus as a student in the late 1960s came amid continuing racial division. Though the University had integrated in 1954, the environment “was not good for black students” when she enrolled.

“We were not encouraged to participate. We were tolerated,” but that changed “once Dean Blanco came on board,” Daniels recounted.

Blanco replaced recalcitrant administrators who did not welcome black students. He pulled white and black students together and encouraged dialogues to increase understanding.

Blanco instilled those guiding principles in his staff, said Patricia Cottonham, the University’s current vice president for Student Affairs. She graduated from the University in 1979, then went to work for Blanco.

“He taught us lessons every day, lessons of tolerance, second chances, lessons of love and understanding. Dean Blanco was called to do the work that he did with young people. From the football field to the halls of the campus community, he was a man who believed – insisted – in justice and fairness for everyone.”

“He taught us that students were the most important people on campus, and we were always to treat them with dignity and respect.”

Blanco and Kathleen Babineaux married in 1964. When she was elected Louisiana governor in 2003 – the first woman and only UL Lafayette graduate to hold the position – Raymond Blanco became the state’s first gentleman.

The former governor said that her husband worried during her political campaigns that his reputation would hurt her electoral chances. But that’s not what she found on the trail.

“I would meet people and they’d say, ‘Your husband saved my life.’ I heard that refrain over and over again. I kept coming back with those stories and he could just hardly believe it. Nonetheless, there was that reality out there, that he had touched so many lives in such a powerful way,” Kathleen Blanco said.

Looking at the new plaque and signage in the Student Union on Friday, Blanco, now 83, said he was touched, though slightly embarrassed by the spotlight. “I think it’s a wonderful tribute, but it’s not my style.”

He continued: “I felt like we really got close to our students. It’s really all about them, not me.”