The owner of Cajun Cannabis held a press conference Tuesday following his bonding out of jail on Monday.

“I was fully aware of the risks and I take full responsibility for my actions,” said owner Travis DeYoung

DeYoung says that he will now be focusing on education and information about CDB, which he says is a natural and healthy alternative substance. 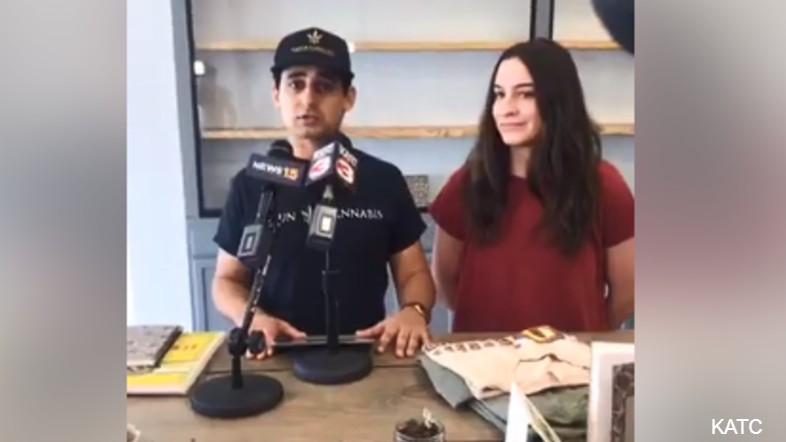 DeYoung says that no people were harmed from his business, most customers are 60 years old or above. He says that he is confident that products sold at Cajun Cannabis were at legal standards.

Providing some information on the investigation, DeYoung says that there have been no complaints from neighbors in the vicinity of the Cajun Cannabis store.

He had no comment on whether other stores selling CBD should face similar scrutiny that his store was subjected to.

They will continue to follow state and local laws once they reopen within the next week working with law enforcement. The store will sell clothes and paper products made from hemp but other products will not be sold.

The video above was from a Facebook Live from KATC’s Chris Welty.

DeYoung told KATC’s Chris Welty that he was leaving Festival International when he was stopped around 11:00.

The Lafayette Parish Sheriff’s Office understands the importance of protecting the well-being of everyone in Lafayette Parish, and will continue to work daily to preserve your safety.

From start to finish, the sheriff’s office conducted a thorough and thoughtful investigation. This case directly followed the path laid out by Louisiana state law, and the obligations of our law enforcement agency.

Moving forward, the Lafayette Parish Sheriff’s Office will continue to assist our partners at the District Attorney’s Office and in the courts with this case, as we do with every investigation, as they fulfill their legal responsibilities.