Members of the Scott Police Department have a new look, but they’re not making a fashion statement. 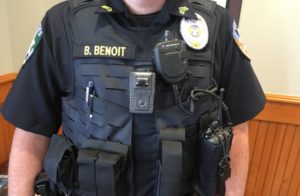 Instead of polyester and wool shirts and heavy leather belts with equipment attached, officers now are wearing dry-fit polo style shirts and a vest with ridges that will keep the officer cool and distribute the weight of equipment.

Chief Chad Leger said he’s been working on this for a while, trying to help his officers avoid fatigue, nerve damage and muscle and joint pain from heavy duty belts.

“I’ve been in law enforcement for more than 30 years, and when I started we had our weapon, radio, cuffs and a flashlight on our duty belts,” Leger said. “Now our tool belt continues to grow…. We have tasers, batons, peppers spray. And we’re starting to see our seasoned officers having problems with their hips, and their nerves in the hips, from the weight.”

Leger started exploring options, and found the cargo vests which have been used by law enforcement in Great Britain for many years. Leger said he believes his is the first department to use them in this area.

Officers can distribute all tools except for their weapon and taser into the pockets of the vest. It reduced to weight of the belt from 14 pounds to about four, he said. The officers are still carrying the weight, but it is better distributed, he said.

The plates from their ballistic vests fit into the cargo vest, he said, and it has ridges that help air circulate between the vest and the officer’s shirt. That helps keep officers cooler in warm weather, as does the new lighter shirt, he said.

“Friday was our first day, and the officers wore them for the Boudin Festival,” Leger said.

The initial response has been really good, he added. The officers didn’t get as hot, so they didn’t get as exhausted working the festival in the humidity and heat. Leger said he’s hopeful that the change will help officers even more during the really brutal summer months.

“This will give them more flexibility, mobility with these vests,” Leger said. “This is really a health and comfort issue.”