LAFAYETTE, La. (KATC) — Brian Pope, the suspended Lafayette City Marshal who will be sentenced next week for his conviction on felony charges, has a paid pollster asking citizens about a “witch hunt,” his wife says in a social media post.

“My husband has paid a consultant/company to run a poll regarding this political witch-hunt which has been going on since 2015,” she wrote. “You will be amazed at the questions.” 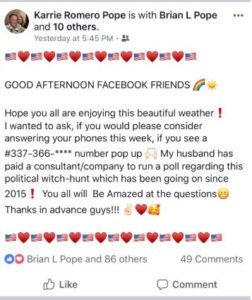 A Reddit user said he was called and posted the questions. Our media partners at KPEL talked to him, and he told them the questions seemed to focus on Lafayette Parish Sheriff Mark Garber and Pope.

Here’s what he posted:

The questions were (paraphrasing)

Pope still has about $9,000 in his campaign fund, according to a report filed with the state last month.

In addition to sentencing next week, Pope also is set for a pre-trial hearing in his second indictment.

According to court records, he has no attorney for that case. His attorney in the first case filed a motion to withdraw, saying that Pope had not retained him for that case.