BY CHARLIE BIER
UNIVERSITY OF LOUISIANA AT LAFAYETTE

Both are University of Louisiana at Lafayette alumni. Both were fighter pilots in two of the biggest conflicts in United States history. And both earned the Medal of Honor, the highest award given to U.S. military service members for acts of valor during combat.

Recipients are recognized yearly on Medal of Honor Day. The federal holiday, observed on March 25, has been celebrated since 1991.

Ryan Gonzales, UL Lafayette’s assistant director of Veteran Services, said members of the military enlist knowing their obligation is to ensure the freedom of others. Bennett, ’69, and DeBlanc, ’47, “epitomized the level of commitment that is sometimes required to carry out that duty.”

The courageous actions that earned DeBlanc and Bennett a Medal of Honor saved the lives of many.

During World War II, DeBlanc escorted 12 dive bombers and torpedo planes on a mission to attack Japanese ships in the South Pacific.

When the group encountered the enemy after about two hours of flight, DeBlanc’s plane was almost out of fuel. Two of his fellow pilots turned around but DeBlanc opted to stay and fight, realizing the gas tank would likely run out of fuel before he would be able to return to base.

After downing several Japanese planes, DeBlanc’s aircraft was hit with an enemy shell. He jumped from the crippled aircraft, opened his parachute and floated to sea.

DeBlanc swam for six hours to reach the Japanese-occupied island of Kolombangara. He hid in the jungle, slept in trees and subsisted on fruit. He was found on the morning of his fifth day by a group of friendly islanders. DeBlanc was delivered to the U.S. Navy after rescuers paddled a 12-man canoe all night in a thunderstorm to rendezvous at a nearby island.

Bennett’s sacrifice played out 30 years later, during the Vietnam War. 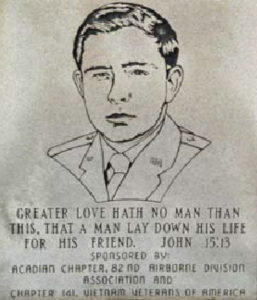 That final sweep would wind up being the last few minutes of Bennett’s life. An enemy missile struck his plane. Bennett decided not to eject to safety when he realized his co-pilot’s parachute had been damaged by the enemy fire. His only remaining option was to ditch the aircraft in the Gulf of Tonkin.

The plane flipped onto its back after the emergency landing. The co-pilot was able to swim free of the wreckage and was rescued. Bennett, 26, whose cockpit was badly damaged, was not.

President Harry Truman presented the Medal of Honor to DeBlanc on Dec. 6, 1946. DeBlanc earned a bachelor’s degree in science from the University in 1947. He died in 2007 at age 86. Before his death, he was Louisiana’s last surviving World War II veteran to receive the Medal of Honor.

The heroism of both men was commemorated last week at a Military Appreciation Softball Game hosted by UL Lafayette’s Office of Veterans Services and UL Lafayette Athletics.