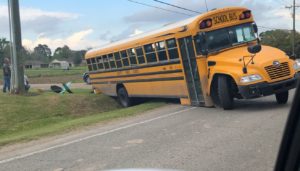 A Lafayette Parish School System bus has driven into a ditch at the intersection of Young Street and Country Run.

A system spokesman said about six GT Lindon students were on the bus at the time, and none were injured.

The driver, who also wasn’t injured, told officials he had trouble negotiating the turn, tried to correct his position by backing up, and ended up in the ditch.

As per school board policy, the driver will be tested, the spokesman said.

System officials are still investigating the circumstances, the spokesman said.