Chitimacha Louisiana Open kicks off with Hole in One contest

Le Triomphe was the sixth and final qualifying site, and a total of 40 golfers qualified for Sunday’s finals, which ware being held at the eighth hole at Le Triomphe Golf Club.

Sunday’s final round is the official kickoff for the Chitimacha Louisiana Open, the sixth event on this year’s Web.com Tour with competition beginning Thursday. To see a full schedule for the Open, click here.

At Sunday’s finals, each qualifier will get one swing on the 180-yard hole, and the closest to the hole will win a $1,000 cash prize. Prizes will also be awarded to the second and third place finishers, and if a player holes out for an ace in the finals, he or she will claim the $1 million top prize.

Players may also claim a spot in the finals prior to the start of Sunday’s event by making a $100 contribution to the Animal Rescue Foundation of Louisiana, the benefiting charity for the Hole-in-One. 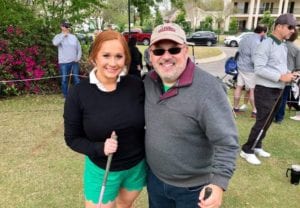 Here’s the latest press release from the Louisiana Open folks:

With its early-season positioning on the schedule, and in its normal position among the first U.S.-based events on the Web.com Tour, the Chitimacha Louisiana Open presented by MISTRAS has always drawn one of the strongest fields among the Tour’s year-long schedule.

This year is no different when one of the oldest events on the Web.com Tour returns to Acadiana and brings high-level professional golf to Le Triomphe Country Club.

Three former Chitimacha Louisiana Open champions are in the field, including one of only two two-time winners in tournament history. Casey Wittenberg, whose family has deep roots in Louisiana, won the event in 2012 and 2017 and set tournament scoring records both years. Fabian Gomez (2010) and lefthander Edward Loar (2013) have also won at Le Triomphe in the last decade.

In addition, four of the previous five winners on the Web.com Tour this year are in the field including former PGA Tour member Mark Hubbard who won the Tour’s most recent event, the Suncoast Classic in Florida. Zecheng “Marty” Dou won the Bahamas Great Exuma Classic, Rafael Campos captured the Bahamas Great Abaco Classic and Michael Gilgic won the Panama Championship during the Tour’s “international” segment in January and February.

This year, though, the Louisiana Open field also includes two players who are instantly recognizable among even casual sports fans.

Former Masters champion Mike Weir, unquestionably the most successful golfer in Canadian history with eight wins on the PGA Tour, will make his first appearance in Acadiana as a part of this year’s field. Weir, who won the 2003 Masters and has earned more than $22 million on the PGA Tour, is playing several Web.com Tour events as part of an eligibility category that allows former PGA Tour members age 48-49 to prepare for the PGA Champions Tour (age 50 and over).

The other golf icon has played in the Louisiana Open four previous times, but all those events came early in his career before Boo Weekley burst onto the national and international golf scene. A three-time PGA Tour champion and a star on the 2008 U.S. Ryder Cup team, Weekley is one of the most outgoing and most liked players in professional golf, and the 45-year old is working his way back from medical issues that included elbow surgery in 2017 and a cancer scare last year.

“When you have name recognition, it always brings more interest to the tournament,” said Chitimacha Louisiana Open executive director Danny Jones. “One of the most popular events we had was when John Daly played here in 2013, and Larry Mize (1987 Masters champion) was a wonderful addition to the field the year he played here.

“But Mike Weir is a recent Masters winner, he won the first Masters I ever went to, and Boo Weekley is a fan favorite everywhere he goes. People have that lasting image of him riding his club down the tee box at the Ryder Cup. We are thrilled to have them in the field, and hopefully that lets people know the caliber of golf that’s playing here this week.”

Weir and Weekley will join the three previous champions and this year’s four earlier winners on Tour in a field of 144 players that begin competition on Thursday and aim for the $550,000 purse including $99,000 to whoever is crowned as the 28th champion of the Tour’s sixth stop on its 27-tournament 2019 schedule.

Practice rounds are set for Monday following the Lourdes Legacy Tournament Monday morning, and continue Tuesday. The United Rentals Pro-Am and the Orbit Energy-The Grouse Room Pro-Am are at 8 a.m. and 1:15 p.m. on Wednesday, all open to the public at no charge.

Championship competition begins Thursday over the 7,061-yard par-71 Le Triomphe layout with the finals scheduled for Sunday. The weekend will also include a “College Day” on Saturday with fans encouraged to join participating pros in wearing their college colors, and “Pink Day” on Sunday when fans are encouraged to wear pink to promote breast cancer awareness.

The Tour has already awarded more than $3 million in prize money in its first five stops, but Jones said this week’s event will bring one of the strongest fields of the season to Acadiana.

“We have guys who were in by 15 spots (on the tournament entry list) and they’re now out by 20,” he said. “Our field is pretty strong. People around here will recognize some of the players, but it’s not all name recognition. Guys you see here, you’re going to see in PGA Tour events throughout the year.”

Weir and Weekley are hoping they’ll be in that group. In his first 12 seasons on the PGA Tour from 1998-2009, he had 68 top-10 finishes and made more than 75 percent of cuts along with his eight wins and the coveted Masters title. But the lefthander injured his wrist at the 2011 RBC Heritage and had only two top-10 finishes on the “big” tour after that injury.

Weir played a Web.com Tour event for the first time in a quarter-century last year and played six Tour events. The Brigham Young graduate has played in three of the five Web.com events this season in hopes of earning his way back to the PGA Tour and a spot on the Champions next year.

“I don’t say anything to people who say I can’t do this anymore,” Weir said last year in a Golfweek magazine story on his Web.com Tour appearance. “I don’t care. I love the game and I love to compete. They aren’t in my body and they don’t know how hard I work.”

Weekley’s story is similar, and his good nature has helped him get through a difficult two years. The Milton, Fla., native, a $15 million winner in his PGA Tour career, had 20 top-25 finishes in a two-year span in 2007-08 (35 in four years) and won twice in those two years in earning a spot on the Ryder Cup team. But he hasn’t played on the “big” tour since 2017 and had surgery on his right elbow in 2017. During his recovery, doctors discovered a cancerous carcinoma in his shoulder that required another surgery.

Weekley, known as one of golf’s gregarious personalities, is shaking off the rust on the Web.com Tour and has played in four of this year’s five events.

“There was a lot of rust,” Weekley told GolfWorld earlier this year. “Heck, my clubs were even all rusted up. They’re still rusted. But I love being able to come back out here. I like the grind. I don’t like it as much as I used to, but I like the competition.”

“They really bring some notoriety,” Jones said, “and they’re a reminder of how tough it is on this tour, and how competitive this tour is to make it back to the PGA Tour.”

The Louisiana Open is one of only two PGA Tour-sanctioned events in Louisiana along with the Zurich Classic of New Orleans, and has been a part of the Web.com Tour since 1992. Only four events have been on the Tour schedule longer, and Le Triomphe ranks as the third-longest host course on Tour.

Play will begin at approximately 7:30 a.m. Thursday and Friday, March 21-22, with 128 players locked into the field courtesy of their Tour status and results of this year’s first five tournaments, and four players who have sponsor exemptions. One of those exemptions is a local favorite, with Lafayette’s Brian Rowell in the field. Twelve more spots will be filled by open qualifying Monday at Oak Wing Golf Club and Links on the Bayou in Alexandria. The field will be cut to the low 65 and ties for the final two rounds.

The Web.com Tour is the “Path to the PGA Tour,” and this year PGA Tour cards will be awarded to the top 25 finishers on the regular-season points list. Another 25 PGA Tour cards will be awarded through the three-event Web.com Tour finals in August, events that bring together the top 75 players on the Tour’s points list and players ranked Nos. 126-200 on the PGA Tour’s FedEx Cup standings.

In addition to bringing championship golf to South Louisiana, the Louisiana Open is also one of Acadiana’s biggest supporters of local and regional charities. Nearly $5 million has been raised for charities and youth groups in the tournament’s 27-year history, and nearly 50 charities and groups are involved and will benefit from this year’s event.

“Our job is to put on a golf tournament,” Jones said, “but our mission and the reason we’re here is to help our community. There are so many groups that help us put on the event here for a couple of weeks, but those groups are out there doing great work all year long. It makes it very special for us when we can help them, and the Open makes that possible.”

Field cut to low 65 and ties following second round