Duson police are searching for two suspects in connection with an armed robbery at a local casino Friday night.

It happened right before 8 p.m. at Miss Mammie’s Casino on Austria Road.

Chief Kip Judice says the victim was attempting to sell an Apple Watch, which was placed on the passenger seat of her car.

The female suspect got out of a gray Nissan Altima, walked over to the victim’s passenger door, grabbed the phone off of the seat, and got back into the car, the chief says.

The victim then got out of her car and opened the driver’s door of the Altima, attempting to negotiate with the suspect for the money owed or the watch.

After a brief struggle with the victim between the car and the door, the suspect allegedly begins to drive away.

Judice says the victim was dragged for about three seconds before falling to the ground. The suspect then is said to have driven off, heading south on Austria Road.

The chief says a male was also in the car with the suspect.

The victim then drove after the suspect, later catching up with the suspect vehicle. The male suspect is said to have given the female suspect a baseball bat to attack the victim. As a result, the victim suffered minor injuries to one of her shoulders.

The female suspect is described as white, weighing less than 100 pounds, and 5’4″ tall. She is said to have been wearing a wig and fake eyelashes.

Although believed to be a switched license plate, the Altima had the Louisiana license plate XRU922. The front left tire had no hub cap, and the rear bumper had distinctive damage to its left side. 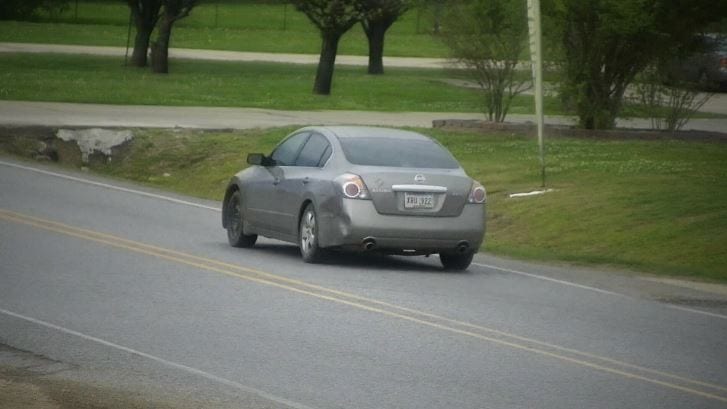 Anyone with information about the owner of the vehicle, the identities of the suspects, or the crime is asked to contact Officer Timothy Cannon at timothy.cannon@dusonpd.com or call Lafayette/Acadia Parish Crime Stoppers.