A resident saw smoke and flames coming from a hallway closet that was used for his heater and air conditioner in his apartment. The electrical box also was in that closet. When firefighters arrived, they found smoke coming from an upstairs apartment and the eaves of the building.

Within minutes, the fire began to vent through the roof of the apartment above three units, fire officials say. As the initial 15 firefighters were extinguishing the fire and performing search operations, the flames spread throughout the common attic of one section of the complex.

Fire officials requested a “general alarm” response to the scene. The “general alarm” required all on-duty firefighters to respond to the scene resulting in 18 fire apparatus and 74 firefighters. Firefighters battled the multi-alarm blaze for an hour and fifteen minutes before getting is under control. The fire caused substantial fire loss to two sections of the apartment complex consisting of at least 27 of the 41 units at Maison Lafitte.

Two Lafayette firefighters were injured while fighting the fire and transported to a local hospital for evaluation. One firefighter was treated for exhaustion and minor heat exposure; the other for a serious strain. They were both released, fire officials say.

America Red Cross responded to the scene to assist with the occupants. At present, nine tenants were placed in a local hotel. Two of the nine tenants had other family members living with them. An assessment of the number of people affected by the fire is ongoing. All 41 units at the apartment complex are uninhabitable. Anyone needing assistance can contact the American Red Cross at 337-281-7703.

The occupants of the apartment stated that they arrived back at the house and noticed fire coming from the closet. A fire extinguisher was utilized, but the fire was too intense. They exited the apartment alerting neighbors.

The cause of the fire is under investigation.

A total of 41 units were damaged at Maison Lafitte Apartments in Lafayette following a fire this morning.  Of those, 38 of the apartments were occupied; one was an office. Two firefighters were injured: one suffered a major muscle strain; the other suffered heat exhaustion and minor heat exposure. Both are classified as minor injuries and the firefighters are expected to be okay.

A total of 27 of the units are said to have major damage, according to Alton Trahan with the Lafayette Fire Department.  Another 14 units have minor to moderate damage caused by water and smoke.

The fire started around Apartment 38; officials believe it may have began in the attic and be weather-related.

The building was built in the early 1980’s before firewalls were mandated.  The new fire codes, established in the last 20 years, mandate that these types of structures have firewalls to prevent fire from spreading from apartment to apartment.

More than 70 firefighters responded to help.  There were 30 units, 65 Lafayette firefighters, as well as volunteer firefighters from surrounding areas on the scene. 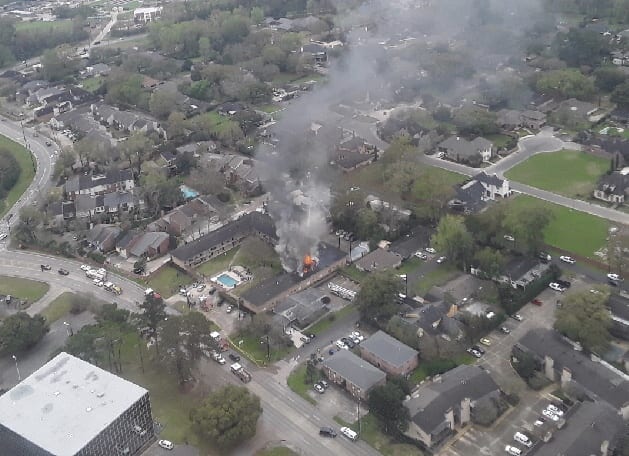 Aerial view of fire at Maison Lafitte Apartments Courtesy Acadian Air Med. It’s unclear at this time exactly how many people were living in the apartments at the time of the fire.  Red Cross volunteers are on scene to help those displaced.

In coordination with the Red Cross, Courtyard by Marriot help house 9 residents those who have been displaced by the fire.  The hotel is located at 214 E. Kaliste Saloom Rd. Management says they have since reached the limit of complimentary rooms but are still offering rooms at a discounted price.

Local businesses, including Domino’s and Albertson’s, have stepped up to help feed those who have been displaced, according to The Courtyard Hotel.  The pizza was donated by some very helpful good samaritans.

Wingate by Windham on Kaliste Saloom Road also is offering a special rate. Call the front desk at 234-3700 for more information.

KATC’s Dannielle Garcia was at the scene on S. College.