Five Lafayette massage parlors were investigated in connection with these instances including Golden Spa, Angel Massage, AA Plus Massage, Asian Spa and Harmony Zen Spa. Three residential locations were also tied to the investigation, according to Sheriff Mark Garber.

Nine people were arrested and charged in connection with the investigation. Their names can be found below.

Sheriff Garber said during a press conference on Wednesday that $50,000 was seized during the investigation. Deputies believe those funds are connected to illegal activity. Five vehicles, jewelry and business goods connected to the investigation were also seized along with business records and electronic devices.

Sheriff’s Garber says there are out-of-state ties to the investigation.

Garber said one woman they questioned,confided in them saying she was being held here against her will and forced into prostitution.

“You have to understand that it’s very tough for women to come forward who are in a foreign country, who don’t speak the language. But we had Homeland Security provide us with a Chinese translator to communicate with these women. And its still got to be extremely difficult for them to come forward, but one did and I wouldn’t be surprised if more come forward,” he said, thanking Faith House for their help in this situation.

He explained that these organizations play a major role in getting victims to safety during situations like this.

One person, Ou Xufang, was booked on charges of human trafficking. Her bond is set at $1 million.

Below are the charges: 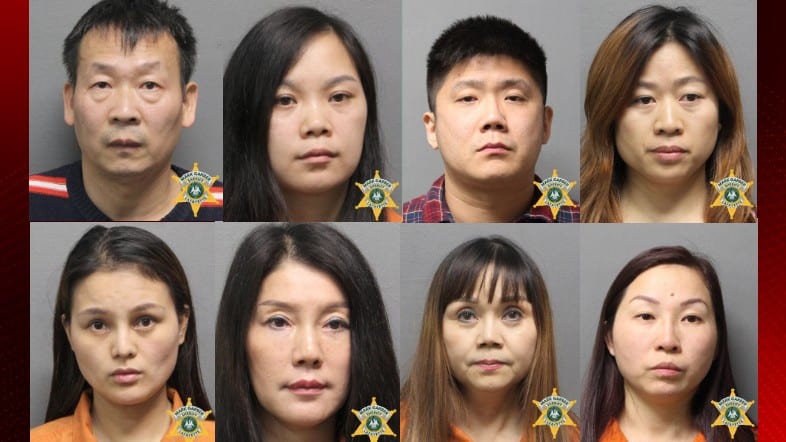 The Sheriff’s Office says that the investigation is still ongoing.

KATC Investigates found that one of the locations, Golden Spa, has a history of similar troubles. Prostitution operations were discovered at the same location, 117 Industrial Parkway, in 2014 where 10 people were arrested. It was operating under a different name, Fortune Massage, and once again in 2015 as Golden Massage.