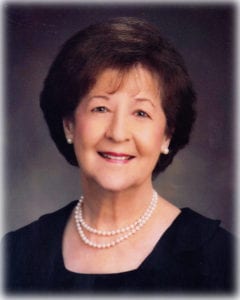 A Mass of Christian Burial will be held on Saturday, February 9, 2019, at 1:00 PM in The Cathedral of St. John the Evangelist Catholic Church in Lafayette for Merry Joy Gerami, 91, who died on Wednesday, February 6, 2019, at her residence in Lafayette.

Interment will be in Calvary Cemetery.

The Reverend Monsignor Keith J. DeRouen will serve as Celebrant con-celebrated by the Very Reverend Chester C. Arceneaux, JCL, VF and Reverend Bryce Sibley. Lectors will be Dr. J. Jerome Smith and Caroline Smith Graham. The Giftbearers will be her granddaughters, Amie Tolson Crockett, Katheryne Smith Guidry and Emily Shea Hanagriff.  The Eulogists will be her daughter, Katheryne Gerami and her granddaughter, Stephanie Gerami Greenfield.

Merry Joy was a native of New Orleans and a resident of Lafayette most of her life.  In 1948, she founded the noted Gerami School of Dance and became a cornerstone in promoting dance education in our area and state.  She also co-founded Lafayette’s first ballet company, “The Acadiana Ballet Company”.  She holds lifetime memberships in state and national dance organizations.

Merry Joy’s love and dedication to Mardi Gras for over forty years has resulted in professional royalty training to Kings, Queens, Maids, Dukes and Debutante Participants in addition to costume design, pageant and ball directing and staging.  Merry Joy served on the Board of Directors and the Ladies Committee for the Greater Southwest Louisiana Mardi Gras Association and was named Parade Marshall in 2011.  In 2005, the Krewe of Oberon named Merry Joy the honoree of the their 76th Ball.

Merry Joy was the recipient of the 2001 Msgr. Alexander Octave Sigur Award for her eighteen years of service for the Bishop’s Charity Ball.  She was also a member of the Secular Order of Carmel and the Carmelite Angels.

Merry Joy, lovingly known as Mom, always put her family first and will be sorely missed.

A Rosary will be prayed Friday evening at 6:00 PM in Martin & Castille Funeral Home.

Memorial contributions can be made in Mrs. Gerami’s name to the Carmelite Monastery, 1250 Carmel Avenue, Lafayette, LA  70501.

A heartfelt appreciation is extended by the Gerami family to Suzanne, Phyllis, Leah, Jessica and Laura who gave beautiful care to Merry Joy and to all of her physicians and nurses who helped her throughout the years.

View the obituary and guestbook online at www.mourning.com