Firefighters say that a homeowner and her baby are safe after a fire Monday on Bridgeway Drive.

Lafayette and Scott Fire Departments were on the scene shortly before noon after a call from the homeowner that the home located in the 100 block of Bridgeway Drive was on fire. 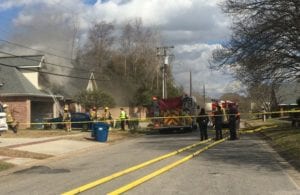 When firefighters arrived, the woman was outside with her baby and pets. She informed first responders the fire was in a closet inside the house.

Firefighters entered the home, finding flames coming from a bathroom and spreading to the second floor. The fire was brought under control within thirty minutes.

The owner was home with her baby in the living room when she began to smell something burning. The smoke alarm activated, alerting the homeowner. She entered the bedroom and noticed the fire in the closet and then exited with her child and pets.

No injuries were reported and the cause of the fire is under investigation.

Foreman was closed near Dulles while crews were on scene.

KATC’s Dannielle Garcia was on the scene.