PRESS RELEASE
James Savage with the University of Louisiana at Lafayette

Gov. John Bel Edwards participated in a benign ruse Friday to honor and surprise a University of Louisiana at Lafayette administrator who tackled a man who police said tried to steal the Magna Carta.

Matthew Delcambre is director of the Center for Business and Information Technologies at UL. In October, he and wife Alexis were visiting the cathedral in the city of Salisbury, about 90 miles southwest of London, where Delcambre had attended a conference.

A fire alarm sounded. Then, a man, holding a hammer, emerged from a bathroom and moved toward a display case that held the Magna Carta. The 803-year-old document is one of the world’s oldest symbols of democracy. It enumerates principles of fairness, justice and human rights, and inspired the creation of democratic governments in England and the United States.

Salisbury Cathedral displays one of four known copies of the 13th-century document in a glass enclosure. Police said the attacker struck the case at least three times, but fled once he found its double-paned glass top impenetrable. The Magna Carta, Latin for “great charter,” was not damaged.

Delcambre chased the man into an adjourning courtyard and tackled him. He and cathedral employees held the suspect on the ground until police arrived.

English media hailed Delcambre’s heroism. The Associated Press picked up those press accounts. The story then spread around the globe, and headlines in Louisiana caught Edwards’ attention.

The governor signed a commendation Nov. 9, acknowledging Delcambre’s actions, but decided he wanted to present it to him personally. The opportunity to do so came Friday prior to UL’s Fall Commencement. Edwards was the ceremony’s featured speaker.

But, there was a catch: Delcambre’s presence at the ceremony wasn’t guaranteed.

The university’s vice president for Research, Innovation and Economic Development was the scheme’s primary architect. His office oversees the university’s research centers.

Delcambre is innovation managing director of the Center for Visual and Decision Informatics, as well as director of CBIT.

Kolluru phoned Delcambre and “told him that every commencement, I invite one of our research center directors” as his guest to the ceremony.

Delcambre accepted. But, it was a ruse. “I don’t actually do that, but now, I am thinking it’s not a bad idea,” Kolluru conceded with a laugh.

Delcambre stood near Kolluru in the Cajundome’s Mardi Gras Ballroom on Friday morning. The ballroom is where administrators and faculty bedecked in full academic regalia gather prior to commencements.

“Matt, I wanted to meet you,” Edwards said, quickly throwing his arm around Delcambre’s shoulders. The friendly gesture surprised Delcambre. 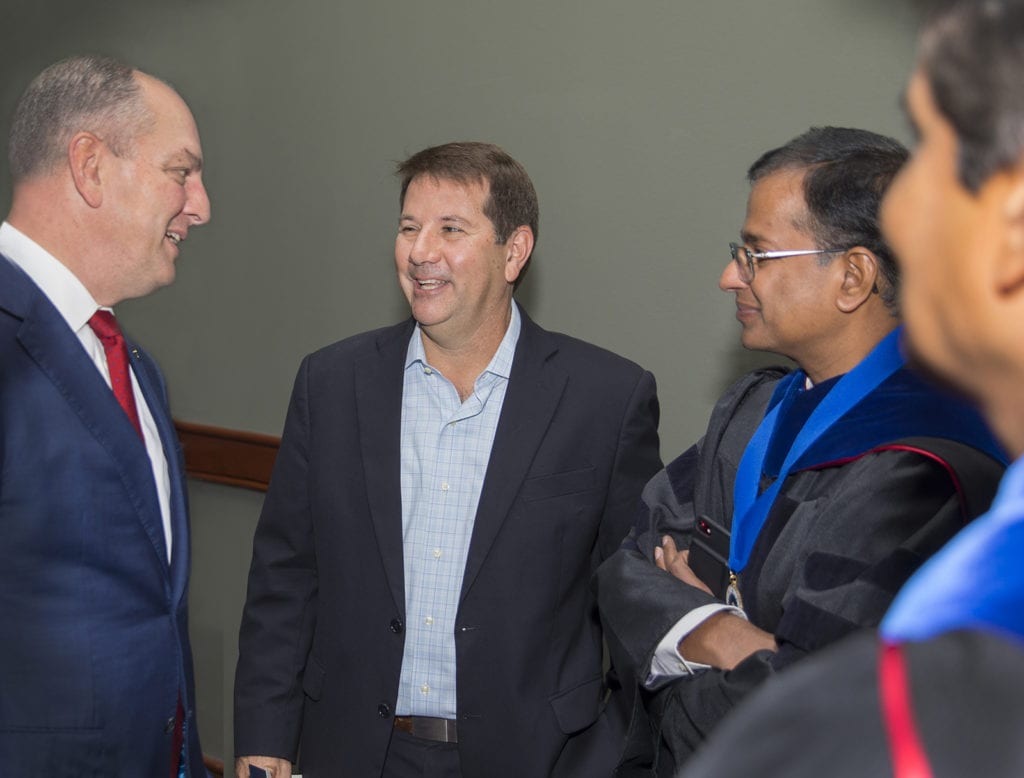 Edwards then opened a blue folder and began reading a special commendation that hailed Delcambre’s “bravery and heroism in safely securing the Magna Carta.”

Delcambre looked down at the carpet. His face flushed. It remained red for minutes after the brief ceremony concluded.

“This was completely unexpected,” said Delcambre, who has, since the October incident, declined to characterize his actions as heroic or even extraordinary. The self-effacement was on ready display Friday when he described himself as “very much” a private person.

“The response was very overwhelming. I did not think it was that big of a deal. I just did what I think most people would have done in that situation.

“Look, it wasn’t just me,” Delcambre continued. “They had workers and security at the cathedral that were part of this. I just happened to chase after him as he was getting away. Then, other people were able to come and help hold him until the police got there.

“The response has been much more than I ever expected, and it had died out,” Delcambre said. He paused, and a grin crossed his face. “Until today.”