Cortland Reed made his ninth annual delivery to an Opelousas food bank this morning – and that means a lot when you find out he’s only 17 years old.

Reed, a student at Westminster Christian Academy, has collected food for the food bank every November since he heard a public service announcement on television.

“I remember I saw a commercial about people being hungry and how they were in need of food,” Reed says. “It really sparked something in me. So I talked with my parents and I decided to start a food drive, and I’ve been doing it since I was 8.” 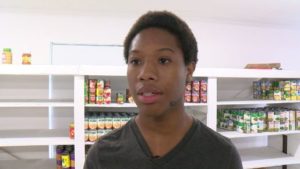 Reed does his food drive around Thanksgiving because it’s a tough time for most food banks. He says after the holiday the shelves at the Icons Food Bank are usually bare.

“Here at Icons, I’m usually the one who restocks the shelves,” he says. “A lot of people come in around the holiday to get food, and after its a drought, almost. I try to replenish the shelves.”

Reed says he gets a lot out of his annual project.

“It makes me feel amazing,” he says. “I just find joy in helping people who are less fortunate than me.”

He said he wants to thank everyone who helped with his drive this year, but he also wants to remind everyone that they can help.

“Just go to your local food bank and donate,” he said.