Firefighters say a house fire in Lafayette has been ruled an accident. The home has sustained heavy damage.

Alton Trahan with the Lafayette Fire Department says the fire occurred on the 800 block of 16th Street just before 7:00 p.m.  A neighbor called indicating heavy smoke coming from the home.

The rear of the dwelling was fully engulfed in flames upon firefighters arrival. The occupant was safely outside.

Firefighters were able to get the fire under control within 15 minutes, according to a release. The home, occupied by a single person, sustained heavy fire damage. The fire originated in an attached apartment to the dwelling.

The main home sustained heavy smoke damage. The occupant was displaced as a result of the damages. 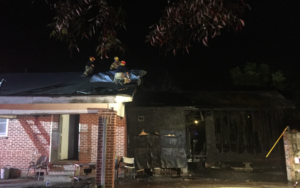 Fire investigators determined the fire originated in the bedroom of the apartment near the area of a window air conditioner. The cause of the fire was an electrical failure.

The fire has been ruled an accident.

American Red Cross was contacted to provide assistance to the occupant.

A map of the area is below: