UL’s champion tree may get more room to get bigger

A state champion tree on UL’s campus may get a bit more room to grow even larger.

The university is considering moving a greenhouse to make room for the big Montezuma cypress. Workers have already torn out four concrete parking spaces, and university officials are working on plans to create a deck with seating around the big tree.

Visitors can find the tree near the backside of the Edith Garland Dupré Library. 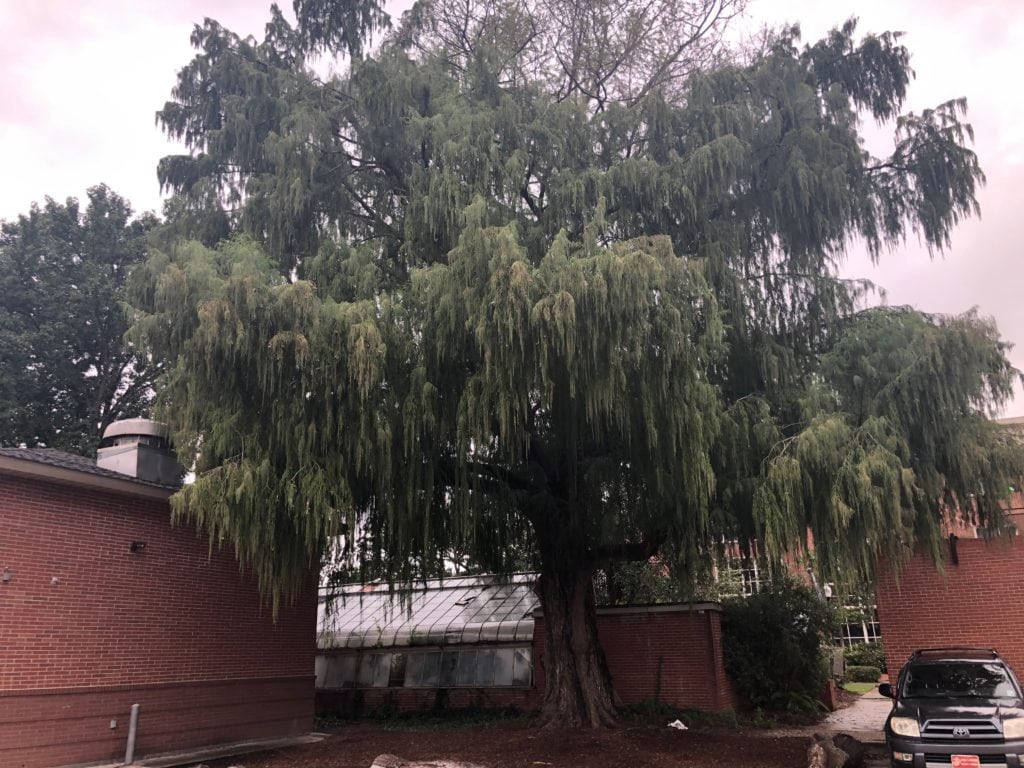 Montezuma cypress are native to Mexico and Guatemala and also found in south Texas and south New Mexico, but they don’t appear in Louisiana unless they’re brought from elsewhere. Nobody’s really sure how this one came to be planted at the Lafayette campus. It’s now 60 feet (18 meters) tall and 16 feet (5 meters) around with branches spreading out 80 feet (24 meters) across.

The Louisiana Forestry Association declared it a champion tree – that is, the largest of its kind in the state – late last year.

“These trees are pretty incredible, and this is definitely one that’s made its presence known,” said Gretchen Lacombe Vanicor, director of the university’s office of sustainability, said in a phone interview.

Both the tree and the greenhouse date from the 1950s, though nobody knows which came first, she said. The tree may have been planted by Ira S. Nelson, a professor from 1941 to 1965 who often traveled to Central and South America, said James Foret, an instructor at ULL’s school of geosciences and a self-described “tree wacko.”

Foret said tearing out part of the concrete parking lot gave the roots room to breathe and absorb nutrients.

“It was getting crowded and compacted against the greenhouse foundations, the parking lot, the sidewalk,” he said in a phone interview.

It’s not the biggest of its kind in the United States and is nowhere near the world’s biggest. The U.S. champion, in San Benito, Texas, is 70 feet (21 meters) high, 28 feet (8.5 meters) around and spreads across 90 feet (27 meters), according to American Forests.

It’s possible that someone in Louisiana has a larger Montezuma cypress in their yard, “and they’ll knock us off our throne,” Foret said.

The trees grow amazingly fast when young, said Bill Fontenot, a consultant for large-scale native plant gardens. He said a university student gave him a seedling she had found growing in a gutter near ULL’s greenhouse in about 1995. Within 15 years, Fontenot said, it was as tall as a native bald cypress he’d planted in 1983.

Foret said the champion status has made people more aware of the university’s tree.

“People walked past it all the time. Now they look up and stop and rest in the shade and do their homework,” he said.