The Lafayette City-Parish Council may consider approval of a deal to sell the old Federal Courthouse property on Jefferson Street next week.

A draft ordinance, which has not been finalized or been formally placed on the agenda yet, would authorize Mayor Joel Robideaux to sell the property for $1.4 million. It includes the old Lafayette Police station and former AOC building. It matches the appraisal done of the property for the project.

Here’s that clause from the purchase agreement:

The proposal would build a total of 68 apartments in three buildings, along with 25,000 square feet of commercial space.

“You’re talking about a $15-20 million development downtown. Those folks who are now going to be going to be paying property taxes, that currently we’re getting nothing for that property, in fact we’re having to spend money to maintain it and insure it and all of those things. So you replace those costs with actually generating property tax revenue, its long overdue,” said Mayor-President Joel Robideaux.

He said the plans from the winning developers stood out from other bidders.

“They were proposing market-based rents and so I felt like rather than having affordable housing or low income credits, having to wait for the federal government to issue low income credits, by making them market-based rents, it was going to speed up the process. And so their proposal was really the only one that checked that box for me so it really kind of made it an easy decision,” said Robideaux.

“More and more today’s society is wanting to live and work basically in the same place,” said Matt. “Downtown is moving forward at a nice pace as we speak, and hopefully that would be a catalyst to develop other retail and residential properties downtown.”

“You know if we see commercial mixed-use development then we’re going to see a lot of activity which is going to generate even more development and that’s ultimately what we want to see downtown,” echoed Robideaux.

Here’s the proposed footprint of the project, which is taken from the companies’ April proposal: 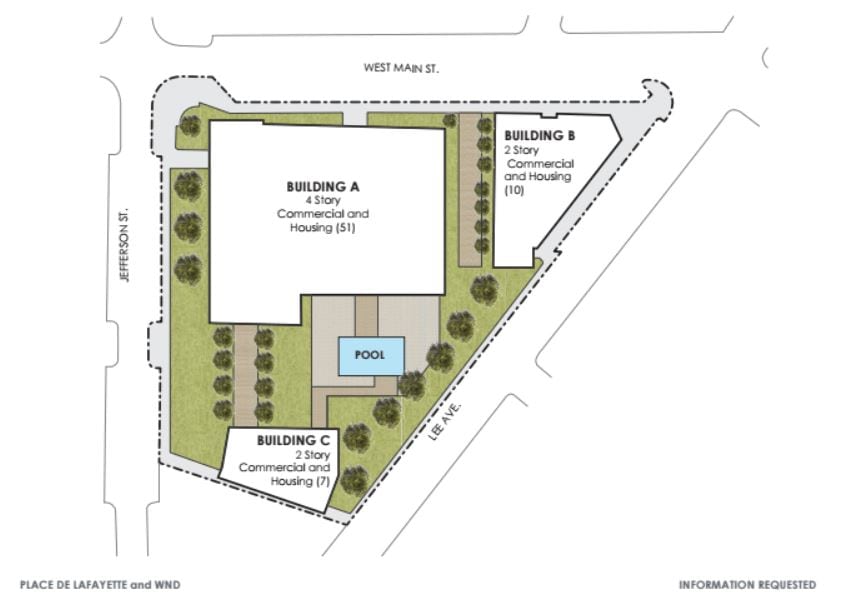 To see the proposal that was submitted back in April, click here.

The purchase agreement, as written now, would require that the project begin no later than July 2019. If it hasn’t started by then, the partnership will have to pay the city $25,000 per month in penalties until it does commence. The deadline for completion of the project is December 2020, as the proposed agreement stands now. The penalty for missing the completion date is $10,000 per month.

The agreement, as written now, also requires that the development be a mixed use, that is, residential and commercial. And, it gives Robideaux or his designee the authority to approve or disapprove any planned facade of the development.

The contract will be introduced at the next council meeting on September 18 and go for final adoption on October 16.

To read the proposed ordinance and purchase agreement for yourself, click here:

To read the assistant city attorney’s analysis of the deal, click here: Executive-Summary-Federal-Courthouse