State Fire Marshal: Don’t go back in a burning home

The State Fire Marshal’s Office is warning Louisiana residents about the dangers of re-entering a burning structure following a fatal fire in Jeanerette. 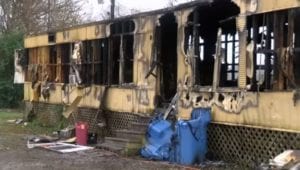 St. Mary Parish Fire District #11 responded to the call about the fire in the 100 block of Edward Lane early Saturday.

Three adult occupants were in the home at the time of the fire, and were able to escape.  Unfortunately, one of those occupants, 25-year-old Raynell Polidore, re-entered the burning home to retrieve a wallet, but never re-emerged.

His body was later discovered in a bedroom near a closet. An autopsy to determine official cause of death is pending with the St. Mary Parish Coroner’s Office.

Investigators have determined, based on an assessment of the scene and witness statements, that the fire began in the kitchen where Polidore had been cooking.  Once the fire started, he alerted the rest of the occupants and everyone escaped together.  The home received smoke alarms three years ago from the local fire department, in partnership with the SFM’s Operation Save-A-Life. However, it is unclear whether the alarms were working at the time of the fire.

Even with the presence of working smoke alarms to alert occupants of a fire danger, the SFM wants to stress the importance of getting out of a burning structure as fast as possible, then staying out.

“No possession is worth risking your life,” said State Fire Marshal H. “Butch” Browning, “The goal is first to do whatever you can to prevent fire.  But if you experience fire, the priority is getting out safely.  Things can be purchased again.  Life cannot.”