The party was for kids who have an incarcerated parent, a single parent or have lost a parent, said Alisa Butler of the KPC.

The party included some toys and a visit from Santa. 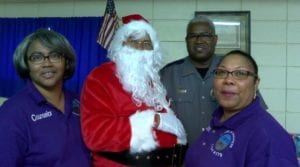 “We just want to show them how much love and support they have,” Butler said. “It’s just about the spirit of sharing for Christmas.”