UPDATE: After our reports, Basile Mayor Mark Denette emailed KATC clarifying the police chief’s statement on when the department will get paid.

Denette tells KATC that the town’s CPA firm says that officers will not be paid in July when the new budget starts. He says that despite what Police Chief Allen Ivory Jr. has said or told his employees, those payments will not happen.

Denette adds that the budget proposal will have a notation stating the budget will only support expenses incurred from July 1, 2019, through June 30, 2020.

That means that officers won’t be paid back-pay for any work they’ve done before June 30, 2019.

Denette also provided a copy of the letter he sent police employees in April about the budget.

In the letter, which you can see below, Denette says the police department’s salary budget has been increased by $10,000 but will be in the red soon. After that, he writes, he won’t be able to sign any paychecks. He said he was told by officials with the Legislative Auditor’s Office that he would face malfeasance charges if he did. 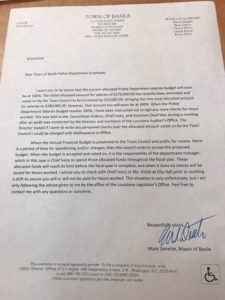 To read our previous story on the town’s financial issues click here.

Basile Police Chief Allen Ivory Jr. has issued a statement regarding his officers not being paid since May.