UPDATE: Bond has been set for the parents accused of cruelty, Evangeline Parish officials say.

Bond has been set at $35,000 each for Paul Thibodeaux and Minette Thibodeaux.

“The Evangeline Parish Sheriff’s Office would like to thank all Agencies, Organizations, and Volunteers that assisted in the return of Bryson Thibodeaux,” a release states.

Here’s the original story from today:

On Sunday, December 30, 2018 the Search for a 9 year old boy ended with his safe return, but the arrest of both his parents. He was found safe and unharmed, a spokesman for the Evangeline Parish Sheriff’s Office says.

Paul Thibodeaux, 45, and Minette Thibodeaux, 45, of Point Blue, were each booked into the Evangeline Parish Jail earlier this morning on the charge of Cruelty to Juveniles.

Here are screen grabs from our Facebook live interviews with the parents yesterday: 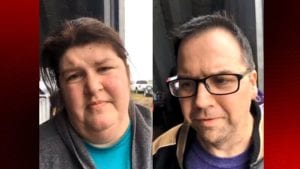 The case began Friday afternoon when 9 year old Bryson Thibodeaux was reported to the Evangeline Parish Sheriff’s Office as a runaway.

On Saturday, December 29, 2018, Sheriff Deputies and Detectives began to search with the assistance of the American Cajun Navy and various State and Local Law Enforcement Agencies, to include State Police and the FBI, along with community citizens from near and afar. The search included four-wheelers, horses, as well as K-9 teams scouring the area.

Some thirty hours or more later Bryson was found by a neighbor near the boy’s residence. Numerous sources tell KATC the child was found hiding in a neighbor’s home.

Louisiana Department of Children and Family Services were immediately contacted after noticing how malnourished the juvenile appeared to be and his home living conditions, the EPSO spokesman said.

DCFS officials took custody of both Bryson and his 8 year old sister. They are both still in their custody.

The America’s Cajun Navy has set up a Go Fund Me for the kids and are also hosting a toy drive. To donate click here.

RAW video from interviews with Thibodeaux’s before Bryson was found: