On Sunday, Dec. 30, 2018, the search for a missing 9-year-old boy ended with his safe return, and the arrest of both his parents. He was found safe and unharmed, a spokesman for the Evangeline Parish Sheriff’s Office said.

Paul Thibodeaux, 45, and Minette Thibodeaux, 45, of Point Blue, were each booked into the Evangeline Parish Jail earlier this morning on the charge of Cruelty to Juveniles.

The case began Friday afternoon when 9-year-old Bryson Thibodeaux was reported to the Evangeline Parish Sheriff’s Office as a runaway.

On Saturday, Dec. 29, 2018, sheriff deputies and detectives began to search with the assistance of the American Cajun Navy and various state and local law enforcement agencies, including Louisiana State Police and the Federal Bureau of Investigation, along with citizens from near and far. The search included four-wheelers, horses and K-9 units scouring the area.

Some 30 hours or more later Bryson was found by a neighbor near the boy’s residence. Multiple sources tell KATC the child was found hiding in a neighbor’s home.

Louisiana Department of Children and Family Services were immediately contacted after noticing how malnourished the juvenile appeared to be and his poor home living conditions, the EPSO spokesman said.

DCFS officials took custody of both Bryson and his 8 year old sister. They are both still in their custody.

Bonds for the Thibodeauxs are pending.

The spokesman couldn’t release information regarding where Bryson Thibodeaux was found, but he says they will release additional information later on today.

Bryson was found shortly before 2 a.m. and is now receiving medical attention.

Below is information previously reported that is now outdated:

The Evangeline Parish Sheriff’s Office has suspended the volunteer portion of the search for the missing 9-year-old out of Evangeline Parish until the morning. That excludes the Cajun Navy, who, along with law enforcement agencies, will continue their search for Bryson Thibodeaux who’s been missing for over 24 hours.

“We have federal, state, and local law enforcement that are on scene. We have the Cajun Navy on scene and many local people from the community who have volunteered in the search effort along with many people from the surrounding communities. As of 7:30 p.m., part of the search has been suspended for the volunteers out of safety concerns. However, the Cajun Navy is going to continue to search throughout the night because they are better equipped for nighttime searches. At 7:30 a.m. in the morning, the volunteers will be back to continue the ground search. We do want to emphasize that this is a mission of searching and rescuing. We are looking for a child who is lost, and we expect to bring the child home safely. The search crews will re-double their efforts in the morning, and the search will continue until Bryson is brought home safely. Updates will be given as more information becomes available.”

Officials say Bryson left his home on Chataignier Road in the Point Blue/Chataignier area around noon Friday. It is not known what direction he took.

Bryson left the house, wearing a yellow and gray-striped long-sleeve shirt and boxers. He has short hair, weighs 47 pounds, and is 3’10” tall.

Bryson’s father says as he was bringing their dogs into the house after letting them outside, he thinks that’s when Bryson walked out of the front door. He says he wasn’t aware because the alarm was already going off from him opening another door to the house for the dogs.

His father says he realized he was missing when his mother called to check on him.

Bryson’s parents are asking anyone in the area to be on the lookout for him and to check around their homes.

The Evangeline Parish Sheriff’s Office previously stated Bryson was autistic; however, the boy’s parents and teacher say he’s not. The mother told KATC’s Josh Meny there have been some “behavioral diagnoses,” but he’s not autistic. Because of this, state troopers believe his judgement may be impaired.

When KATC reached out to the sheriff’s office, a spokesperson said Bryson’s not autistic but did not acknowledge the press release stating so.

Hundreds of volunteers have helped with the search. Paul’s Meat Market and Grocery donated boudin and water for search efforts.

“There are so many volunteers out here, but I think, everyone if you can, please come out and continue looking for him. Call his name out. Just don’t stop looking. I think he’ll be found safe,” said Jamie Johnson, Bryson’s fourth grade teacher.

UPDATE: He has been found safe. ————KATC’s Josh Meny is at the command center near Ville Platte for the search for missing 9-year-old boy Bryson Thibodeaux. Josh is talking with the father Paul Thibodeaux.https://katc.com/news/around-acadiana/evangeline-parish/2018/12/29/nine-year-old-boy-missing-out-of-evangeline-parish/ 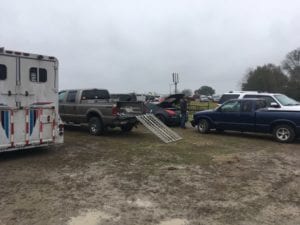