UPDATE: The Evangeline Parish Sheriff’s Office has now confirmed that they found human remains during the search for a missing child.

Upon discovery, Louisiana State Police were notified as well as the Evangeline Parish Coroner’s Office. The scene was secured until the arrival of LSU FACES on Sunday morning December 30, 2018.

Evangeline Parish Sheriff’s Office met with a member from FACES. FACES were able to exhume other remains. All remains located were taken to LSU Anthropology Lab for further analysis to identify the person.

There is no further information at this time. The case is under investigation pending results received from LSU FACES.

If anyone has any information in reference to the remains located is asked to contact the Evangeline Parish Sheriff’s Office Investigations Division at 337-363-2161.

ORIGINAL STORY: KATC has confirmed via two independent sources that an old human skull was found in a barn yesterday during a search for a missing child.

The child’s parents were arrested this morning and booked on cruelty charges. To read that story, click here.

We’re told the skull is very old, and was found by people searching the area for the missing boy. We’re working to get more information from the Evangeline Parish Sheriff’s Office on the find. We don’t have any confirmation of who owns the barn or the property it’s on; it is located approximately a half of a mile from the child’s home. 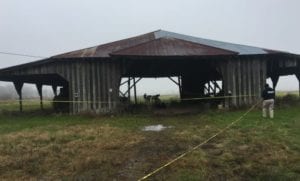 We’ve also reached out to the FACES lab at LSU; we’re told anthropologists from the lab are taking possession of the skull to attempt a reconstruction. While our reporter was on the scene, she saw the crew from FACES there.

We’ll update this story as soon as we have more information.