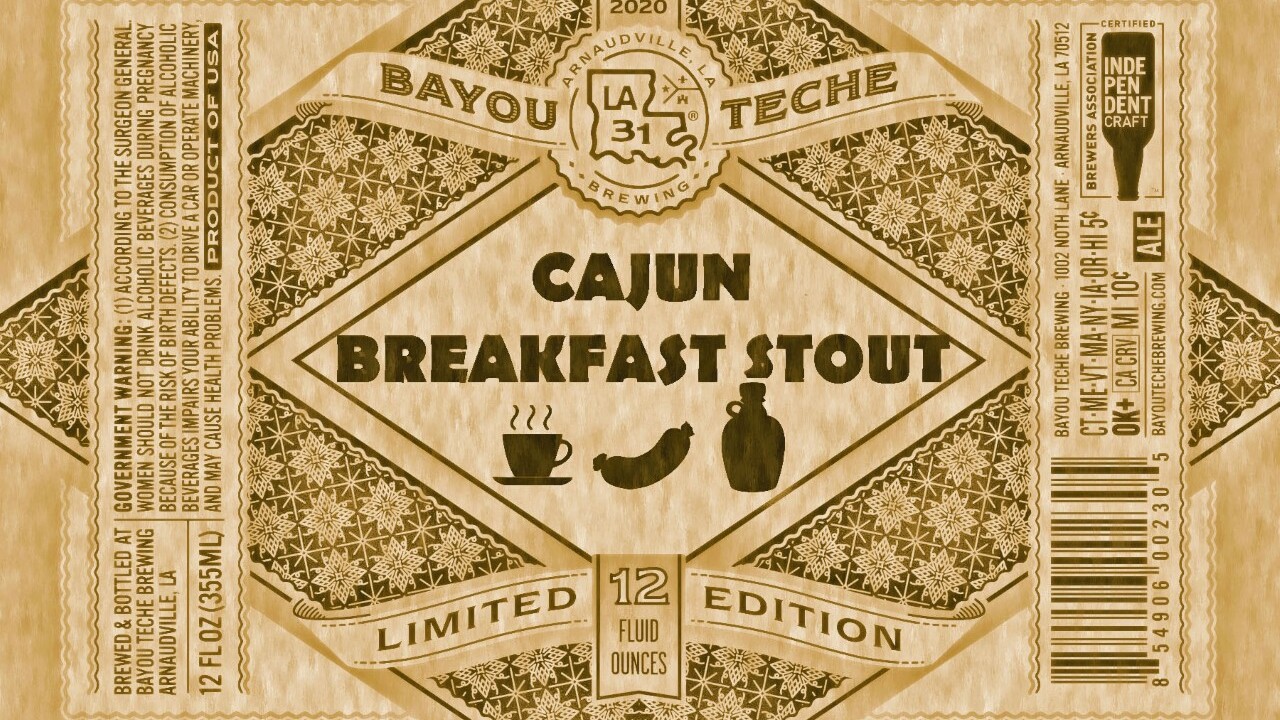 ARNAUDVILLE, La. - Arnaudville's Bayou Teche Brewing is releasing a limited edition beer that they call "Cajun Breakfast Stout" to kick off this year's Mardi Gras celebrations. This black ale is brewed as a breakfast stout, a style of beer usually crafted with assorted foods associated with breakfast added to the beer's fermentation - products such as coffee, maple syrup, donuts, bacon and oatmeal have been used by other breweries.

Bayou Teche's brewers chose to craft their version of this style of stout with the most Cajun breakfast item that they could think of - boudin. In addition, their recipe for this beer includes locally roasted organic coffee from Art's Coffee Roasters, and Steen's cane syrup.

"We're pretty sure that this is the first beer to ever include boudin in its recipe," said brewmaster Brian Broussard. The boudin was added twice during the brew day, once in the mash, and also towards the end of the boiling of the unfermented beer. Broussard added that the beer includes a bit of lactose sugar. Lactose is an unfermentable sugar which leaves an enjoyable residual sweetness in the Cajun Breakfast Stout Beer.

"When we were kids, we'd often go fishing with our dad and our uncles in the Atchafalaya Basin," said Bayou Teche's Karlos Knott. "On the way, they'd stop to buy supplies at a country store, and then they'd walk back to the car and laughingly tell us they had just bought a Cajun seven-course breakfast - a six pack of cold beer and a link of boudin. We thought it would be fun to try to recreate that seven course breakfast in a bottle of beer."

Cajun Breakfast Stout is packaged in 12 ounce-bottle four packs, and will be first available at a special event in Bayou Teche Brewing's Arnaudville tap-room. The Release Party is Saturday, February 15th from noon until 9pm. Live music featuring Corey Ledet's Creole Trio Experience starts at 2 pm. In addition to the Cajun inspired wood-fired pizzas offered by the brewery's Cajun Saucer, there will also be couche couche and boudin links cooked by Mike Huval in their beer garden. A special first pour of the Cajun Breakfast Stout and a commemorative campfire coffee mug is will be available while they last.