Every year, there’s a display of crosses at the town’s depot on Main Street.

“Please let the people know. Some of these heroes family members do not live in Church Point. This display is for them. To show that we have not forgot. We will stand watch from sunrise to sunset. There will be a “honor sentinel patrol” every hour on the hour all 3 days,” says Lee Daigle, Commander VFW Post 9903 and an organizer.

The display started yesterday, and continues until tomorrow at 6 p.m., when a closing ceremony is held.

The crosses were made by area students, to honor the 21 men of Church point who have died in wars since World War II. Many of those who died were in their teens, just like the kids who made their crosses.

“These guys took their last breath in a foreign land for us. We’ve had white crosses made by Church Point High School students,” Daigle said. “So basically, we have crosses made by kids for kids who never got to come home.”

Daigle said the event is aimed at helping families heal, helping local veterans to heal, and for the town to heal. But there’s one other reason, he said:

“Remember,” he said. “These men don’t have daughters and sons. If we forget, it’s gone.”

The display is hosted by VFW Post 9903 and American Legion Post 225 as a reminder of those who gave all for our country.

Here are their names:

We’ll have video later today on KATC TV3. In the meantime, here are some photos from last year, courtesy of Lee Daigle: 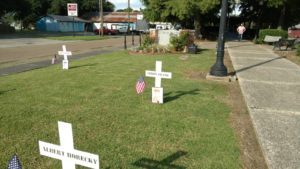 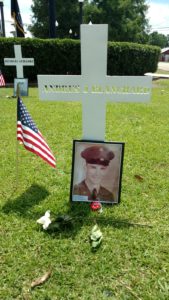 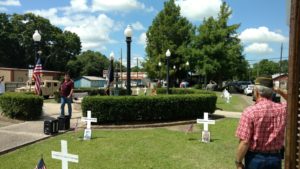