Church Point Police Chief Dale Thibodeaux is commending a reserve police officer for his efforts in saving a driver and passenger from rushing flood waters.

Thibodeaux says that this morning, a vehicle was attempting to drive out of the trailer park on West Corporation Street when it was swept into a ditch by rushing waters.

“We had a vehicle that decided to go through the barricades, come out, and ended up swept by the current,” said Chief Thibodeaux.

The front of the car became submerged in the ditch and began to slowly sink.

Mayor Ryan “Spanky” Meche said the vehicle was so deep they had to use an excavator to remove it. 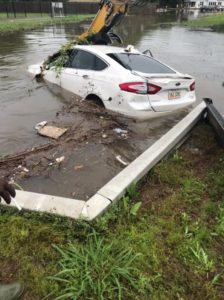 At the time, Reserve Police Officer Trey Venable was blocking off the roadway at Broadway and West Corporation Street due to high water.

Thibodeaux says Venable was able to rush to the car and quickly assist in removing the two occupants from the vehicle.

Once safely removed, the vehicle was reportedly swept away and “submerged beyond sight.”