This afternoon, the city of Eunice turned out to honor their state football champs.

Earlier this month, the Eunice High Bobcats won the LHSAA Class 3A championship in the Superdome; they came from behind to beat Sterlington 59-47.

Sunday, residents lined the streets as the team and their coaches paraded through town. Afterwards, everyone met at City Hall so that fans could meet their players.

It was the first time in 36 years that the school had won a championship. To see our videos, click here. 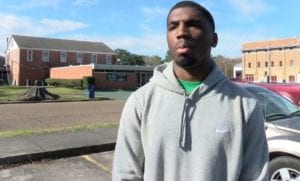 “It was nice bringing a state championship back to Eunice,” said defensive end Jordan Oglesby. “We put in a lot of hard work to win this title, and it was exciting to see everybody in Eunice to come out and support us.”