When staff arrived at the office early Monday, they found a broken window and a big mess.

The front door was unlocked, the office’s supplies were strewn all over the place and the Christmas tree had been knocked over, Chief Jimmy Broussard said. 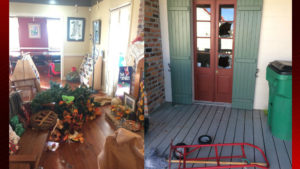 Nothing was stolen, Broussard said, but it looked like someone helped themselves to a drink from the office’s refrigerator.

Whoever broke the window apparently cut themselves on the broken glass, so detectives swabbed it and will see if the person’s DNA is in the system, the chief said.

Gwen Hanks, executive director of the office, said everything’s OK now and it’s all been cleaned up.

“You can’t tell anybody else has been in here except us,” she said.

Hanks said the staff is thankful for everyone who has been calling to check on them.