Rayne Police have two people in custody and are investigating a shooting that happened on Ann Drive this morning.

No injuries have been reported, but Chief Carroll Stelly says people aren’t cooperating with police. A five to six-block area of Rayne has been taped off while police collect evidence. 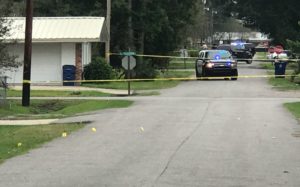 The shooting happened about 11:30 a.m. on Ann Drive near EA School Street, he said. The dispute was between two groups of people, and several homes were damaged, he said.

Two “persons of interest” are in custody, he said.

Detectives are still questioning witnesses and gathering evidence, he said.

If anyone has information, they are asked to call Crime Stoppers.