A pick-up truck drove into the Acadia Parish Courthouse this morning.

Police Chief Jimmy Broussard said the accelerator on the truck got stuck. The driver and passenger were transported to be checked out because they’re older people, he said. They’re OK, the chief said. 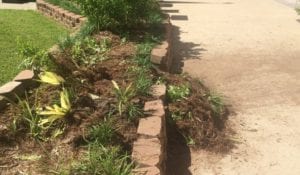 The accident could have been a lot worse, because there was a crew setting up a stage near the site of the accident, the chief said. The truck missed the stage and those workers, he said.