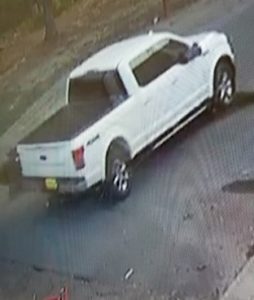 Police are searching for a white 4×4 Ford truck in connection with an aggravated robbery in a Lafayette parking lot Friday night.

At 7:21 p.m., officers responded to a call about a robbery in a parking lot at the corner of Johnston Street and Ambassador Caffery Parkway.

According to a spokeswoman for the Lafayette Police Department, the female victim was approached by a masked male suspect as she was getting into her vehicle. The victim was hit with a “blunt object” during the robbery, the spokeswoman says. The victim’s family says she was attacked by a metal mallet.

A child who was with the victim then ran into the store to get help, the family says.

Police say the male suspect came from a white Ford pick-up truck that was parked next to her vehicle.

The victim was taken to the hospital for her injuries. Family members tell KATC she is recovering from the attack and is in stable condition after receiving stitches and treatment for a broken bone.

The suspect vehicle has a black bed cover and a yellow license plate. Anyone with information about the vehicle pictured is asked to contact the Lafayette Police Department or Lafayette Crime Stoppers at 232-TIPS.

Friday evening, police say a woman in Lafayette was attacked and robbed by a masked man.

Police say it happened in a parking lot at Johnston St. and Ambassador Caffery Pkwy. near Michaels. The woman is being treated for minor injuries she received during the attack.

Witnesses say the masked man used a hammer to threaten the woman, but police are calling the weapon a blunt object.

So far, no arrests have been made.

If you know anything about this crime, call the Lafayette Police Department.