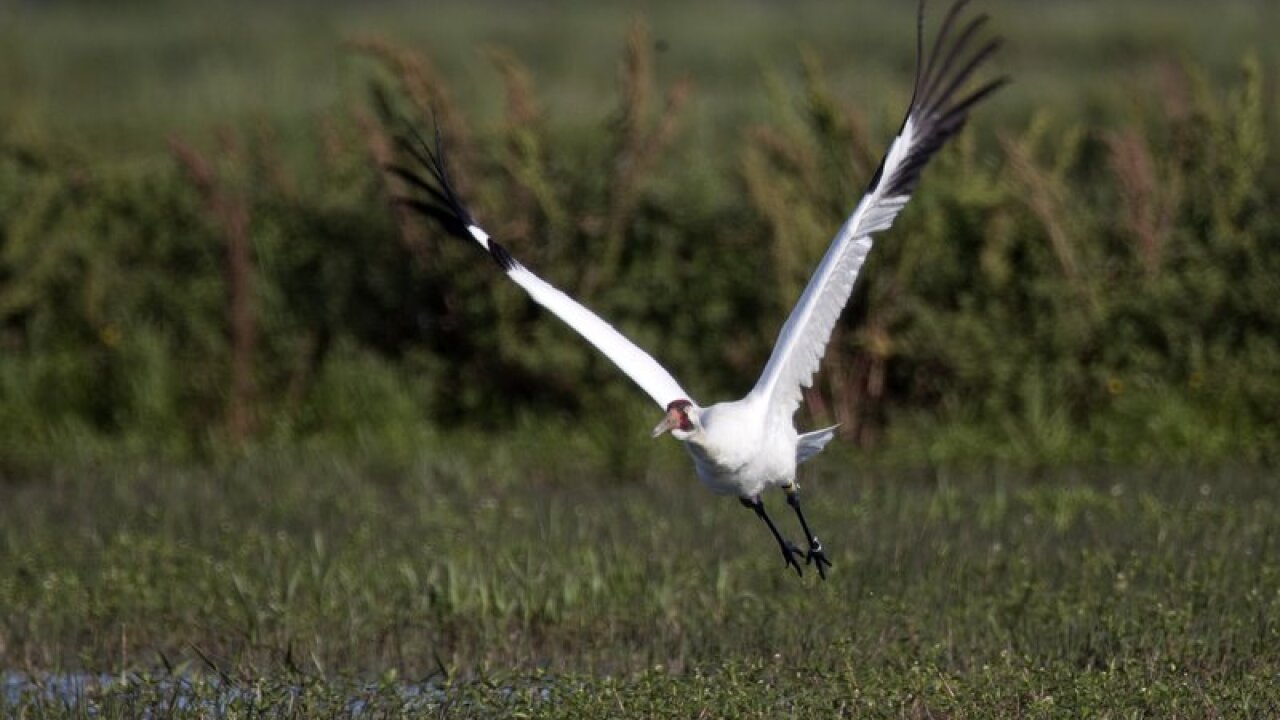 Associated Press
FILE - In this March 23, 2018 file photo, a whooping crane, a critically endangered species, flies away from its nest with eggs, in a crawfish pond in St. Landry Parish, La. There&#39;s a $5,000 reward for information about whoever shot and killed an endangered whooping crane in southwest Louisiana in November 2019. Department of Wildlife and Fisheries enforcement spokesman Adam Einck says the crane&#39;s body was found Nov. 15 in a rice and crawfish field in the town of Elton in Jefferson Davis Parish. A necropsy determined that it had been a shot and killed a day or two earlier. Einck says there&#39;s also still a $6,000 reward out for tips leading to the arrest and conviction of whoever shot a whooping crane in Acadia Parish in November 2018.(AP Photo/Gerald Herbert, File)

A Rayne man who was accused and later confessed to the killing and transporting a federally protected and endangered whooping crane in 2016 has been sentenced.

United States Attorney David C. Joseph announced that Kaenon A. Constantin, 28, was sentenced Thursday, July 30, 2020, to five years of probation for the killing.

United States Magistrate Judge Hanna also ordered Constantin to pay a $10,000 fine and to pay $75,000 in restitution to the Louisiana Department of Wildlife and Fisheries (LDWF).

In November 2019, Constantin was named in a federal bill of information for violating the Lacey Act in May 2016.

According to a release, on May 20, 2016, Constantin and a juvenile, using .22 caliber rifles, shot at a pair of whooping cranes located in a field within Acadia Parish. One of the cranes, identified as L5-15, fell dead in the field, and Constantin and his accomplice retrieved its carcass.

The other crane, identified as L3-15, flew too far north into another field so that it could not be retrieved, but investigators later recovered its carcass.

After retrieving L5-15’s carcass, they noticed that it had transponders on its legs and received information that the bird was a whooping crane. Constantin and the juvenile brought the carcass to the juvenile’s home, where they severed the legs from L5-15’s using a knife and removed the transponders.

The knife, carcass, severed legs, and transponders were discarded along a nearby road

When initially approached by investigators shortly after the crime, Constantin lied about his involvement, causing the investigation to continue for nearly two more years before he finally confessed in April 2018.

“Our agents take any investigation of illegally shooting whooping cranes very seriously. Chief of LDWF Enforcement Col. Chad Hebert and I applaud the judge in this case for imposing severe monetary punishments to help deter anyone from this behavior,” said LDWF Secretary Jack Montoucet. “The Louisiana Department of Wildlife and Fisheries has spent a lot of resources in an effort to bring back the native whooping crane to a sustainable population, and senseless shootings like this case make that mission much more problematic.”