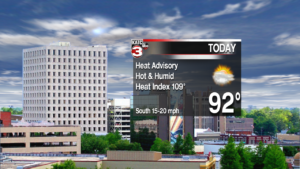 Today is the first day of summer! The summer solstice officially happens at 10:54am, but the summer heat has been here for weeks. The weather certainly won’t disappoint the new season as highs will climb into the lower 90s under partly cloudy skies. The dew points will remain in the mid to upper 70s, so heat index values will climb over 108. 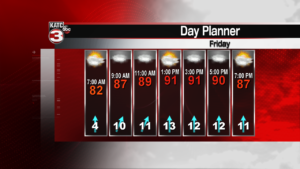 A Heat Advisory is in effect for today. Here along the Gulf Coast, a heat advisory will go into effect if the heat index is exceeding 108 degrees and when actual temperatures at night don’t drop below 80 at night. We’re holding in the lower 80s as of this write (just before 4am).Thursday morning we managed to drop to 79 for a brief period and our heat index hovered around 107 for several hours Thursday afternoon. Regardless of the official “Advisory” you should use caution when temperatures are at the extremes. Use common sense and drink plenty of water, fine shady areas, take frequent breaks, and use sun screen. If you don’t need to be outside for long periods, don’t. 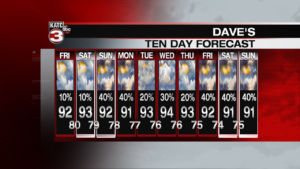 We won’t get much relief from any showers or thunderstorms because of stable air aloft from a weak ridge of high pressure. But the sea breeze will slide in during the afternoon, allowing for some winds to reach the 10-15 mph range. It won’t offset the stickiness, but will at least cool your already sweaty skin! More of the same can be expected for Saturday. A weak trough will move in late in the weekend, allowing the sea breeze to be more productive, therefore a better chance for afternoon storms to cool us off on Sunday into Monday. 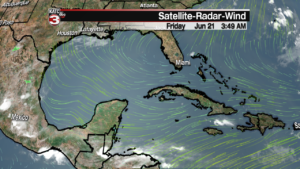 No issues over the tropical waters this morning and we don’t expect anything to develop over the weekend.